Microsoft At It Again With Surface Vs. Apple iPad Ad 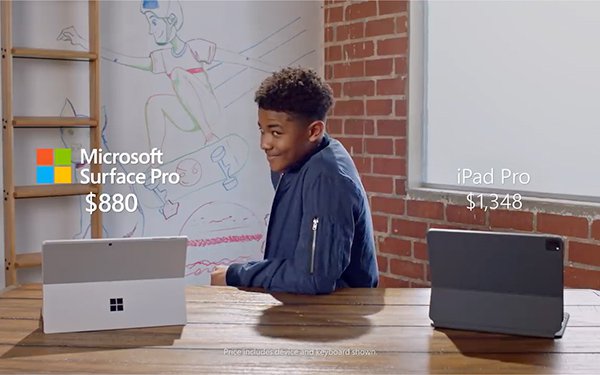 Microsoft released an ad on Tuesday that pits the Surface Pro 7 against Apple's iPad Pro.

Continuing the Surface Pro 7 vs. MacBook ad campaign that began earlier this year, Microsoft starts by pointing out that the iPad does not have a built-in kickstand option.

“This is the iPad keyboard,” says the actor. “It’s a lot heavier.”

“You want to be this guy?” he says, while holding up an ‌iPad‌ with a dongle attached.

The actor also points out that the Surface is a computer and a tablet at about half the price of an iPad.

This ad doesn’t compare the Surface touchscreen vs. the Touch Bar, suggesting the touch feature makes it a better gaming device.

Last month, Microsoft released a video ad focusing on the Surface Duo, with two high-resolution touchscreens. The Duo, with a 360-degree hinge, sports Microsoft 365 and every Android app in the Google Play store. It offers multiple modes and new dual-screen enhanced apps that let marketers, for example, run and view two apps simultaneously or span one across both touchscreens to optimize campaigns.

Marketers can run Teams and Outlook at the same time, for instance.