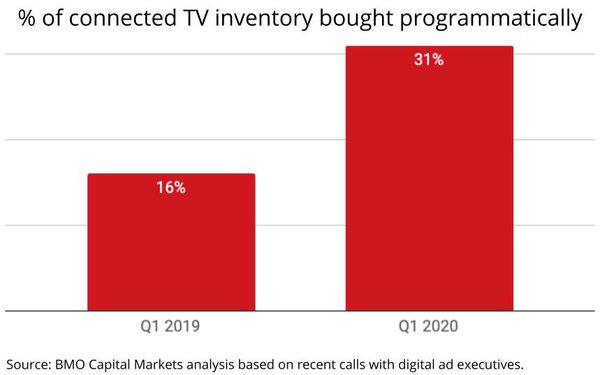 Connected TV (CTV) advertising demand continues to surge, according to an analysis published today by a leading Wall Street equities firm, based on recent calls with digital advertising executives, and one of the major reasons is the ability to buy it programmatically.

"Programmatic execution grew to 31% of CTV inventory in the first quarter of 2020 vs 16% in the year ago period," BMO analyst Daniel Salmon writes in a report sent to investors today.

Salmon was citing data from Innovid, which also noted that the volume of CTV ad volume it processed during the first quarter of this year rose 63% over the fourth quarter of 2020.

Noting that Innovid serves more than half (55%) of all CTV ad inventory, Salman added that its fourth-quarter 2020 volume was also up 85%.

And it's not just CTV ad volume that is expanding, but CPMs too. Citing data from Simulmedia, Salmon wrote that CTV CPMs are approaching $40, or about double comparable conventional TV CPMs.

Citing GroupM Global Business Intelligence President Brian Wieser, Salmon added that higher CTV CPMs are based on the fact that they are programmatic and based on "data-driven decision," and that they generally have better "ad loads" than conventional TV advertising environments.

"GroupM noted that over time, the fact that CTV is simply more TV suggests that pricing between linear and CTV should eventually be more consistent," he added.