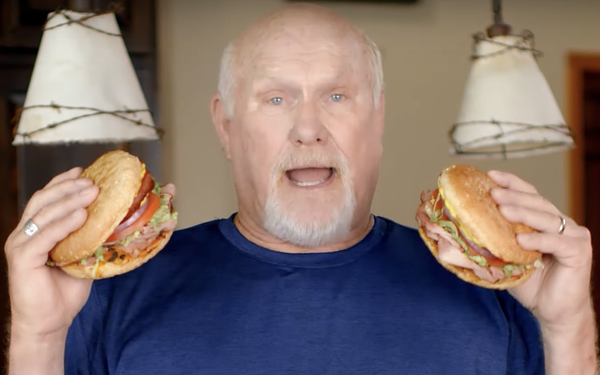 Fast-casual restaurant chain Schlotzsky’s is doubling down on meatier sandwiches — to the magnitude that it needs Terry Bradshaw to train people how to eat them.

That’s the gist of the “Train For A Mouthful” regimen and its three exercises — The Breadlift, The Chew Chew and The Stacks on Deck — as explained by the pro football icon in a campaign that starts Thursday.

It’s part of a BOGO promotion running through May 2 that is designed to generate awareness of meatier sandwiches and is available only to Schlotzsky's loyalty program members.

Starting on March 1, the chain’s more than 300 restaurants began offering larger-portion sandwiches, as seen in this 15-second “It’s A Mouthful” video.

A longer spot opens with Bradshaw sharing his “new workout” while wielding The Original Schlotzsky’s sandwich in each hand.

He goes on to poke fun at the name Schlotzsky’s — a mouthful in itself.

“Terry likes to say he’s a big personality with a lot to say, which fits in perfectly with 'it’s a mouthful,'” Casey Terrell, senior director of marketing at Schlotzsky’s, tells Marketing Daily.

“He fits perfectly for the brand — not just as an athlete but just as a personality.”

Schlotzsky’s core consumers are about evenly split male/female, in their mid-40s and family-oriented. In addition to reaching that audience, the chain hopes to connect with people “who had come to us before and lapsed. [We want] to get them to come back and try us again,” says Terrell.

It’s a strictly digital campaign, although some franchisees will use local cable TV, radio and out-of-home advertising with “some pretty localized messaging.”

The BOGO offer for a medium sandwich can be accessed in the chain’s app and is available only to members of its loyalty program.

“This BOGO is a first for us on a national scale, especially doing a loyalty-only promotion,” adds Terrell.