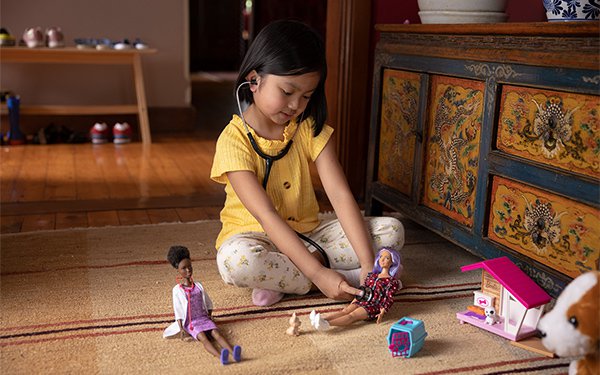 Mattel is hoping to encourage more doll play with its first big campaign for its iconic Barbie doll since "Imagine the Possibilities" back in 2015.

The “A Doll Can Help Change The World,” campaign, developed with BBH LA, builds on the brand’s “You Can Be Anything” platform, with a touching film based on the findings of a recent neuroscience study conducted by a team of researchers from Cardiff University in collaboration with Mattel’s Barbie division. Those findings suggest playing with dolls allows children to develop empathy and social processing skills, which are key determinants in kids’ future emotional, academic, and social success.

This work is designed to be “gender-agnostic,” encouraging play for both boys and girls by featuring both sexes in the advertising.

The hero film will be supported with activations that solidify Barbie as a “thought-leader in empathy,” quips the representative. The first activation is an editorial partnership with The Washington Post, followed by other social and retail partnerships in the months ahead.

Ads will appear across a variety of media, including broadcast, streaming and social, including events like the “Billboard Music Awards,” and NBC’s “This is Us” and “Zoey’s Extraordinary Playlist” finales, and related digital takeovers.

This global campaign will be translated into 12 languages. “We know that parents feel undue pressure and stress with kids being at home right now, separated from school and their peers, and hope this campaign reminds them that doll play has developmental benefits,” says the brand representative.