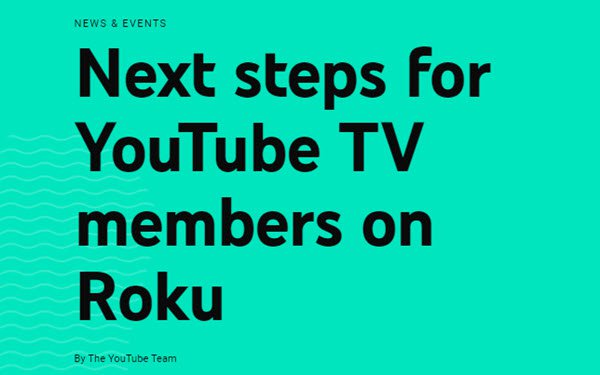 The distribution feud between Roku and Google has escalated, with Google posting a workaround to allow YouTube TV members on Roku to access the TV bundle inside the main YouTube app.

On April 30, Roku responded to a contract dispute by removing YouTube TV from Roku’s Channel Store, precluding the app’s installation or reinstallation on Roku devices by any new YouTube TV customers. However, Roku said it would continue to offer access to existing YouTube TV users “unless Google takes actions that require the full removal of the channel.”

On the same day, YouTube posted a blog response saying, "We encourage Roku not to remove the YouTube TV app so that existing users can continue enjoying the service."

But on May 7, YouTube posted another blog message informing its TV bundle subscribers that it was introducing “a new feature that gives you access to YouTube TV from within the YouTube app, making it easier to enjoy all the content you love. Existing members can easily access YouTube TV by clicking on ‘Go to YouTube TV’ in the main YouTube app. This update will be available to all YouTube TV members on Roku over the next few days, and we will expand to as many devices as we can over time.”

YouTube also said that it is “still working to come to an agreement with Roku to ensure continued access to YouTube TV for our mutual customers,” and that as of the post’s date,  existing YouTube TV members still had access to the app on Roku devices.

“We’re also in discussions with other partners to secure free streaming devices in case YouTube TV members face any access issues on Roku,” YouTube added. “Separately, we are also in ongoing, long-term conversations with Roku to certify that new devices meet our technical requirements. This certification process exists to ensure a consistent and high-quality YouTube experience across different devices, including Google’s own — so you know how to navigate the app and what to expect…”

Roku responded with a statement describing Google’s actions as “the clear conduct of an unchecked monopolist bent on crushing fair competition and harming consumer choice.”

The workaround “highlights the kind of predatory business practices used by Google that Congress, Attorneys General and regulatory bodies around the world are investigating,” Roku asserted.

Roku also repeated its assertion that it “has not asked for one additional dollar in financial value from YouTube TV. We have simply asked Google to stop their anticompetitive behavior of manipulating user search results to their unique financial benefit and to stop demanding access to sensitive data that no other partner on our platform receives today. In response, Google has continued its practice of blatantly leveraging its YouTube monopoly to force an independent company into an agreement that is both bad for consumers and bad for fair competition.”

Google/YouTube previously stated its offer to Roku “was simple and still stands: renew the YouTube TV deal under the existing reasonable terms. However, Roku chose to use this as an opportunity to renegotiate a separate deal encompassing the YouTube main app, which does not expire until December. Our agreements with partners have technical requirements to ensure a high quality experience on YouTube. Roku requested exceptions that would break the YouTube experience and limit our ability to update YouTube in order to fix issues or add new features…”

According to some reports, Roku wants to avoid being forced to adapt its own technology to the AV1 technology that YouTube is integrating in order to enable 4K and lower bitrates when the main YouTube app expires at year's end.

YouTube TV/Roku users, and the industry, will have to stay tuned for further developments.