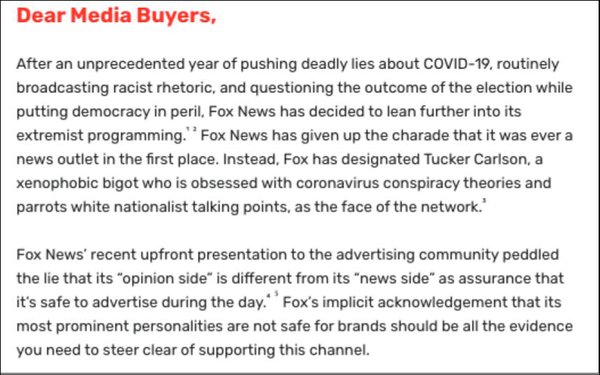 "We understand that the annual television upfront is an important part of the advertising sales period for major advertisers," reads the letter, which was signed by groups including Black Lives Matter Global, GLAAD, Indivisible, Media Matters and Move On.

"The top networks present themselves in the best light possible to advertisers and media buyers in order to sell out their advertising inventory for the year ahead," the letter continues, noting: "Media buyers who aren’t watching Fox News daily are an easy target to get duped by the network’s empty promises of feel-good and fact-based reporting. Instead, protect your client’s brand and reputation so that they are not ruined by Fox News’ gross mismanagement, volatility, and extremism."

The letter goes on to point out that major corporations and brands are increasingly  taking public stands against extremism and attacks on American democratic institutions, and cites numerous references Fox News has made to undermine public health response during the COVID-19 pandemic.

"This is not the moment for business as usual. In this case, advertisers don’t even need to put their money where their mouth is. All they need to do is refrain from partnering with and funding an engine of violence and extremism like Fox News. It’s the lowest possible bar — but a pivotal moment to stand on the right side of history," the letter continues, adding that Fox News apparently soft-peddled or hid some of its most extremist content and personalities, explicitly citing the omission of Tucker Carlson, during its upfront presentation to advertisers.

"The upfront presentation is an important inflection point," the letter concludes, noting that "Fox News has already made clear what you can expect from the network next year: more Tucker, more lies, more extremism, and more racism. Use this inflection point to quietly part ways with Fox News."

In response, a Fox News spokesperson provided a statement, asserting the boycott will have no impact on its upfront advertising sales: "Fox News is about to close out its fourth consecutive year delivering new records in advertising revenue, so clearly Media Matters’ predictable ongoing partisan attacks have zero impact outside of their irrelevant echo chamber on social media."