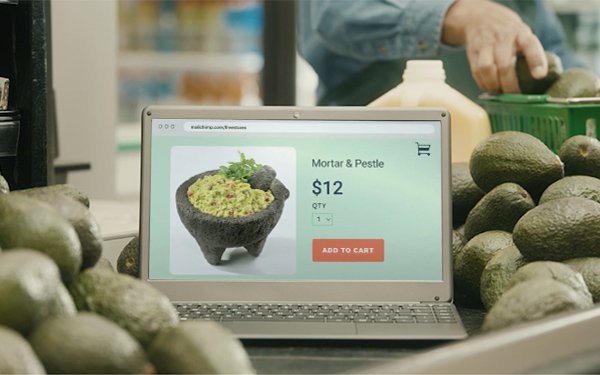 Mailchimp has rolled out its new ecommerce tool Stores, and is offering it to 14 million small business customers.

The company has also launched an ad campaign for Stores.

In one video spot, a couple tries to load up on avocados with only partial success. In another, one partner seeks romance while the other demands a Mailchimp store. Both spots conclude with this call to action: Get Started with Mailchimp for free.

The “Free as a Mailchimp Store” campaign  will appear across paid video and paid social channels, including Facebook, Twitter, Instagram, Pinterest, YouTube and TikTok (Mailchimp’s first advertising on TikTok), a spokesperson says. And the campaign will be supported with organic email outreach.

Mailchimp  is not releasing details on frequency or budget.

Previously known mostly for email, Mailchimp,announced Stores in April, when it was still in beta. The tool allows merchants to recreate brick-and-mortar retail experiences through an intuitive e-commerce platform. And they can use such Mailchimp capabilities as email and automation to drive traffic to their site.

At that time, the company also announced Appointments, a tool that lets firms offer service bookings online and integrate with email marketing, websites, and calendars.