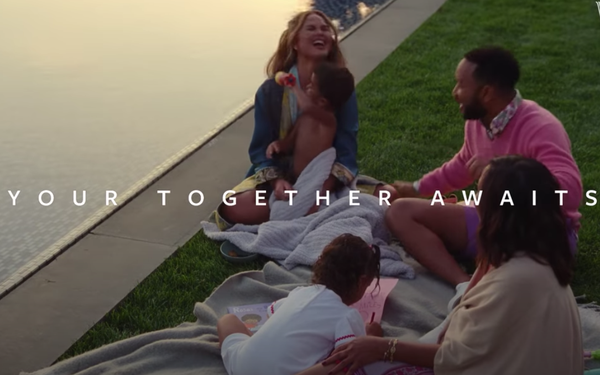 Home stay vacation company Vrbo is launching its largest campaign to date with creative featuring real-life families reuniting for the first time since the pandemic began over a year ago.

The  spot, “Vrbo Presents: After A Long Wait,” features John Legend singing a remake of the Johnny Nash classic, “I Can See Clearly Now,” to celebrate togetherness.

The ad features real families who were surprised with their very own special reunions with their loved ones, including grandparents meeting their grandchild for the first time and close friends and family surprising a newly married couple on City Hall steps.

A heartstring-tugging 2:30-version of the spot debuted Tuesday night on “The Voice” season finale and was introduced by Legend himself. Legend and his family are also featured in the spot.

“Vrbo believes there's nothing more important than being with the people you love, and we're celebrating that it's finally time to be reunited,” said Lish Kennedy, Vrbo’s vice president of global brand, in a release. “The music and stories are so powerful that we decided to debut the ad by airing behind-the scenes footage along with this goosebump-creating commercial together on network TV in a way that’s never before been done.”

Both 60- and 30-second versions of the spot will air across major networks including ABC, NBC, and E! and online in YouTube and Facebook ads.

The videos can be viewed at Vrbo.com/together. The campaign page will be updated as Vrbo releases longer versions of the behind-the-scenes reunion stories and adds more campaign elements through the summer.

Legend joined forces with singer and songwriter Raphael Saadiq to produce the music featured in the ad. The musician did the voiceover in the last vrbo campaign, which launched in December.

Latina- and Black-owned 360 Agency covered talent and music strategy, while 360PR+ provided communications strategy and PR support for the campaign.

Vrbo, which is pronounced ver-bow, is part of Expedia Group. Its global community of homeowners and travelers offers properties around the world, including cabins, condos and beach houses.