Caution: When Every Day Is Fryday, Beware Of Health Issues 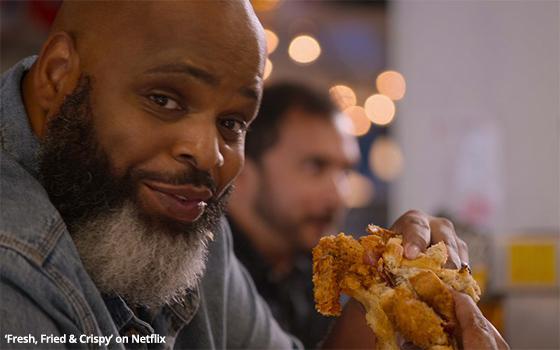 A new Netflix food show raises the love of deep-fried foods to a whole new fetishistic level, and in the process, reignites concerns about the way in which TV helps to promote unhealthy habits and lifestyles.

The show is called “Fresh, Fried and Crispy” and it starts streaming on Netflix next Wednesday. It is one of a growing number of non-scripted, reality-type shows that have turned up on Netflix as the streaming service broadens its offerings in a bid to be all things to all people.

Except for the fact that it has no commercials, the show is little different from a dozen or more other such travel-and-food shows seen on channels such as Food Network, Cooking Channel and Travel.

In other episodes, the cities he visits include Las Vegas, Cleveland, Savannah, San Diego, Baltimore and Birmingham, Alabama. In the photo above, Mr. Drops is seen tucking into a Colossal Crab Sandwich, comprising crab, crab cake and bacon, that is the specialty of an eatery in Baltimore.

Elsewhere he will be seen eating fried pork chops, fried Oreos, fried rice balls, fried bologna and basically anything that can be cooked or deep-fried in hot oil or butter (and often both at the same time).

Mr. Drops is described by Netflix as a food reviewer specializing in fast food whose videos are popular on YouTube. In the first episode of “Fresh, Fried & Crispy,” he tells us that a video he made in his car one day, in which he is seen sampling a new double-cheese bacon burger from a fast-food chain has had something like 25 million views on YouTube.

The video is basically just him biting enthusiastically into this new burger sandwich and then having what you might describe as a very visible, near-spiritual experience from the ecstasy he is evidently feeling from this interlude of in-car dining.

It is always great when people who pursue their passions on social or shared media get discovered by a big TV company that wants to give them a real television show. In this context, the TV Blog wishes Daym Drops all the best in this new food endeavor.

But here is the dreaded “but” paragraph: But at the same time, one has to wonder about the toll that a diet of fried foods will eventually take on the health of this fried-food foodie and possibly, the health of others who enjoy watching these kinds of unhealthful-eating TV shows and are prone to emulating them.

On this show in particular, the slow-motion bites that Mr. Drops takes into his mouth seem to have an effect on him akin to that first shot of rye downed by a thirsty alcoholic.

Certainly, we have seen many of these shows in which food experts such as Guy Fieri and Andrew Zimmern are seen hitting the road and sampling regional dishes.

But in Mr. Drops’ case, his interest in the fried foods he is given in his travels seems to exceed the levels of enthusiasm we have become accustomed to.

Just recently, we saw a story on “Inside Edition” about a food-show host named Rob Petrone, who had a serious heart attack at the relatively young age of 41 from what he assumes was the steady diet of fattening restaurant food he willingly consumed for a show called “Restaurant Hunter” (seen regionally in New York State on Verizon Fios).

With his decision to go public with his story of how his reckless eating on television almost killed him, Mr. Petrone has done society a service.

Based on that, our advice to Mr. Drops, and all the other gluttonous TV foodies out there, is the same one countless moms have given their children since time immemorial: Take sensible bites!