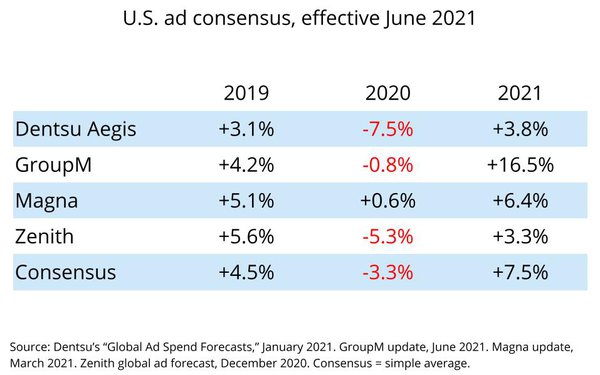 The outlook for U.S. ad spending has improved considerably for this year, as have estimates for 2020, which included a recession attributed to the COVID-19 pandemic, according to a mid-year update released this morning by GroupM's Business Intelligence unit.

GroupM's update brings Madison Avenue's Big 4 ad forecaster consensus growth projection for 2021 to +7.5% from +5.1% in March, with others expected to release upward revisions in the next few weeks.

GroupM's update also reduces the severity of the 2020 ad recession, which according to the WPP unit is now estimated to have declined less than a percentage point (-0.8%), vs. a 2.0% decline estimated in March and a 3.9% decline projected in its original December 2020 outlook for 2021.

That revises the current Madison Avenue consensus for 2020 to -3.3%, with other adjustments expected to come.

Meanwhile, GroupM is projecting more sustained growth for the next several years, with 2022 U.S. ad spending now projected to rise 12.4%.

"As we approach the midpoint of 2021, advertising growth for the year is far exceeding our previous expectations, leading us to revise our forecasts for this year and beyond," GroupM's Business Intelligence team writes in the just-released June 2020 edition of its mid-year forecast.

"It was evident that the ad market was relatively strong during the first quarter and that it would further benefit from high inflation across the economy, lifting our expectations for growth," the report continues explaining the upward adjustment, "But we didn’t fully appreciate just how much the economy and advertising market were heating up. It was only after we saw results for the quarter from the likes of Google, Facebook and Amazon (and Snap, Pinterest and others) that we could appreciate just how strong the market was, especially for digital media." 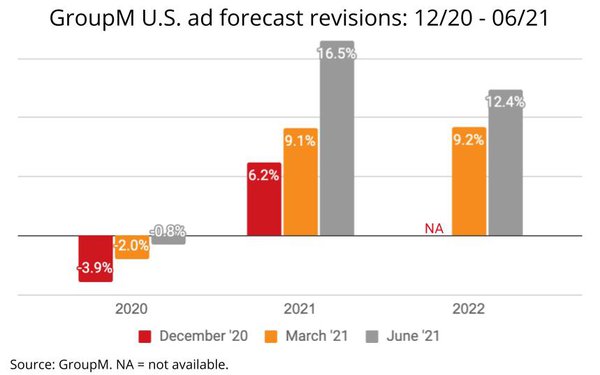