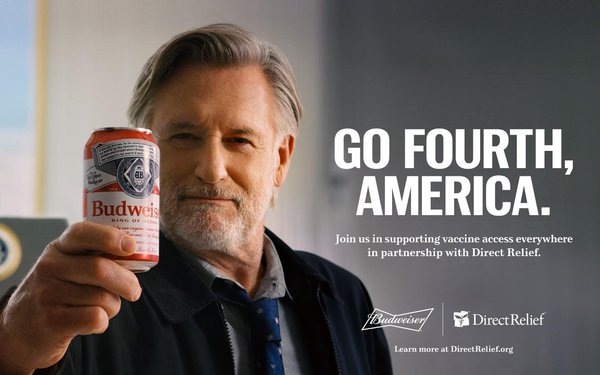 Only this time, the enemy being vanquished isn’t extraterrestrial aliens, but a terrestrial virus.

“Should we win the day, the Fourth of July will no longer be known as an American holiday, but as the day when the world declared in one voice, we will not go quietly into the night,” Pullman repeats from the 1996 film. But, instead of the original’s perhaps-still-relevant “We will not vanish without a fight, we're going to live on, we're going to survive,” he now concludes with “We will fill the sky with so much light and freedom this thing will rue the day it ever messed with us.”

Anheuser-Busch certainly hasn’t been messing around in its support of getting people vaccinated against COVID-19. The film, for instance, ends with a call for donations to DirectRelief.org, which focuses on global vaccine access and education.

But the company has pulled back from a promise made earlier this month to buy everyone a round of beer when the country reached the White House goal of 70% of Americans getting at least partially vaccinated by July 4.  Oh, A-B is still giving away the drinks. But the reason now, in conjunction with the White House’s #BackTogether messaging announced this morning via tweet, is to “acknowledge our progress as a nation.”

So, from July 2 at noon ET through July 5, anyone 21+, vaccinated or not, can go to MyCooler.com/beer and upload a picture of themselves in their “favorite place to grab beer.” In return, they'll get a gift card for what A-B says is the average retail price of its products -- $5 -  which can be added to digital wallets and is good for any of 100 A-B brands, beer or not.

In a separate sweepstakes, Budweiser is giving away 20 prizes of $525 each via Venmo. Entrants must follow @BudweiserUSA on Twitter, Facebook or Instagram and post with the hashtags  #GoFourthAmerica and  #Sweepstakes and their Venmo handle between July 1 at 12am ET and July 2 at noon ET.

The Pullman film is running on Budweiser’s digital and social channels, as well as on connected TV, Reddit, digital OOH in New York City and Washington DC, and in-stadium during MLB games on July 3 and July 4.