Over the past year, connected TV has narrowly surpassed desktop to become the most-used device for delivering video ad impressions in the U.S. and Canada.

Meanwhile, CTV had the lowest fraud rate among devices, and, along with other devices, saw mostly positive trends in fraud and brand safety metrics — although the types of fraud most common in CTV shifted notably.

In addition, for the first time, fraud rates for programmatic closed the fraud gap with direct publisher buys

Those are some CTV-oriented highlights from DoubleVerify’s latest Global Insights Report, an annual study of internet media quality and performance. The latest edition analyzes trends based one trillion-plus video and display ad impressions served by DV between May 2020 and April 2021 across 80 markets and more than 2,100 brands.

CTV accounted for 29% of all video impressions served in North America, edging out desktop, at 28%. The mobile web and mobile apps had shares of 25% and 18%, respectively.

CTV’s growth is, of course, being driven by advertisers’ increased focus on premium video inventory and resulting budget shifts from linear TV to digital video.

Still, on a global basis, mobile continued to be the primary driver of an overall 56% increase in video ad impressions volume.

The mobile web accounts for 57% of video ad impressions in Latin America, 44% in EMEA, and 25% each in APAC and North America. But mobile apps rule in APAC, at 63%. 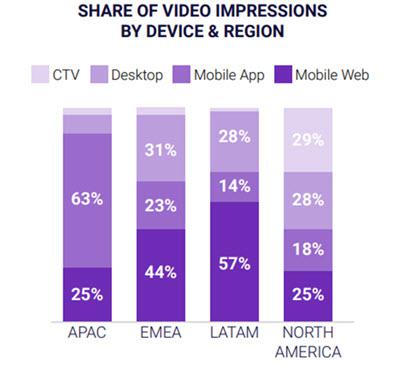 Looking at fraud and other quality issues, post-bid fraud and SIVT (sophisticated invalid traffic) rates declined globally, across devices, by 30% YoY on average, from 2% to 1.4%. 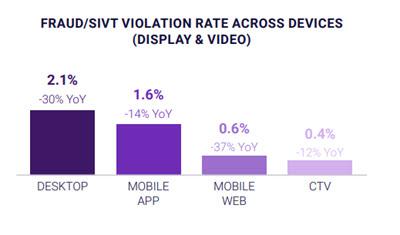 Fraudsters continued to evolve their methods, however: In 2020, bot-based fraud drove 78% of all fraud/SIVT violations in CTV. While bots are still the most common method, as of April 2021, their share of fraud was down to 44%, as data center traffic fraud’s share leapt to 36% over the past year.

With data center traffic, fraudsters spoof server-side ad insertion inventory (a mobile impression may be made to look like a CTV impression, for example), or SSAI inventory contains incomplete information that may hide fraudsters.

One reason for declining fraud rates in CTV and elsewhere is increased protection and adoption of pre-bid avoidance solutions and platform certifications. (Last year, DV says it identified 20 new fraud schemes, including the OctoBot scheme that targeted CTV and mobile devices.)

Still, there were pockets of increased fraud (targeting of video on mobile app devices jumped nearly 50%). And despite lower rates, the overall volume of fraud/SIVT violations across devices and regions remained the same.

Meanwhile, for the first time in the report’s history, the post-bid brand suitability violation rate across devices and regions decreased — by 4% YoY — likely due to continued adoption of pre-bid brand safety solutions. The brand suitability violation rate continues to decline: Compared to full-year 2020, it was down 12% between January and April 2021.

However, brand suitability protection in CTV is “nascent,” notes DV — and to date, the largest advertiser clients have been far more likely to adopt a new offering: creating CTV inclusion and exclusion lists at the app level, allowing for mapping disparate CTV app-naming conventions and identifiers to the IAB taxonomy. (On average, there are 15 different app names that map to a single name within the IAB framework, “so mapping is critical to tracking and reporting on CTV spend,” the report points out.)

The ability to target or avoid CTV content at the programming level will roll out later this year.

In CTV, blocking unsafe or fraudulent impressions in video environments has been difficult because video blocking requires a the VPAID technology standard, which has no coverage in CTV, according to DV. But advertisers who added protection by using its video filtering tool had a 49% lower brand suitability violation rate.

More good news for CTV and all devices: Globally, the gap in media quality between programmatic and publisher-direct is closing.

For the first time, DV found that the brand suitability violation rate and fraud/SIVT violation rates for programmatic versus direct publisher buys now come within 1% of each other — a major shift from previous years.

In addition to efforts to clean up the programmatic ecosystem, this reflects the growing use of automated ways of buying directly, meaning private marketplaces and programmatic guaranteed.