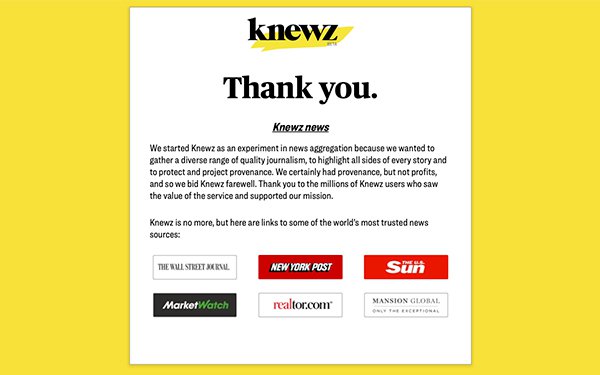 News Corp launched Knewz service in January 2020 to fend off search engines and news aggregators such as Google, and Facebook. Now the company is shutting it down.

Knewz -- curated by a combination of artificial intelligence and human editors -- lived for about 18 months before shutting down, but it's not clear why the company decided to shutter the news aggregation site created by Rupert Murdoch’s News Corp.

News Corp had accused Google and Facebook of profiting off its publications’ content without compensation, but when announcing its shutdown acknowledged the venture was not profitable.

“We started Knewz as an experiment in news aggregation because we wanted to gather a diverse range of quality journalism, to highlight all sides of every story and to protect and project provenance,” read a statement on the company’s website. “We certainly had provenance, but not profits, and so we bid Knewz farewell.”

The site aggregated headlines from more than 400 publishers, from Politico, Fox News, Daily Mail, Washington Post and Washington Examiner to the Anchorage Daily News and The Sun.

The notice also direct site visitors to other publications such as The Wall Street Journal, The U.S. Sun, New York Post, MarketWatch, and Mansion Global.

“Knewz is unique in that readers can, at a single glance, see multiple sources,” stated Robert Thomson, chief executive of News Corp., when the site launched.

It also, at the time, said it would share "as much data as possible with publishers” to help monetize content. The company also says it will prominently feature the branding of the news sites.

News Corp also shuttered the Twitter site, @knowknewz, but Google’s index still points to “The latest Tweets from Knewz (@knowknewz). Welcome to Knewz — a balanced mix of news from a wide variety of sources, free of filters and bias bubbles.”