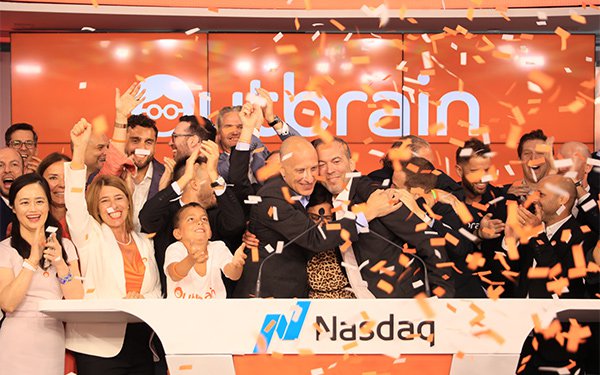 Outbrain, the content discovery platform, made its stock market debut on Nasdaq today, trading under the stock ticker OB.

‘It feels amazing,” said Outbrain co-CEO Yaron Galai, and co-CEO David Kostman concurred. Both men rang the opening bell on Nasdaq Friday, signaling the start of the company’s trading. Kostman said “it’s been an exciting journey, with the ability to go through an IPO in a traditional way.”

Traditional in this case means publicly filing a registration statement on Form S-1 with the U.S. Securities and Exchange Commission (SEC) related to a proposed IPO of its common stock, rather than finding a special-purpose acquisition company (SPAC) to take the it public.

Outbrain made 8 million shares available in its initial public offering (IPO). If it sells all for $20 each it will raise $160 million. The offering is expected to close on July 27, 2021, subject to customary closing conditions. In addition, the underwriters have been granted a 30-day option to purchase an additional 1,200,000 shares of common stock from Outbrain at the initial public offering price, less underwriting discounts and commissions.

Citigroup, Jefferies, Barclays, and Evercore ISI are acting as joint bookrunners for the offering. JMP Securities, Needham & Company and LUMA Securities are acting as co-managers.

Kostman has lots of experience taking companies public, but it’s a first for Galai. “In the tech world, being public gives you such a big boost from so many angels,” Kostman said. “It makes the company stronger, faster, bolder, and more disciplined.”

Outbrain has made three acquisitions in the past four years that bring new technology to the publishers the company works with. “Making acquisitions as a private company is incredibly difficult,” Galai said. “Being a public company will help.”

When asked whether he ever thought about taking a company public while he was in high school trying to determine his career path, Galai -- who describes himself as a “builder of products” -- said most of the companies he created were sold, such as the one to AOL for $400 million, and another one to Microsoft.

Outbrain recently announced it will roll out a new algorithm called Quality Rating. It rates the quality in the recommendations the company serves.