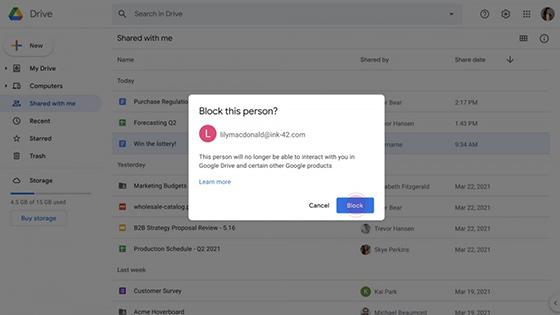 Consumers who are tired of receiving X-rated offers and other types of spam have a new tool.

Google is rolling out a function that allows users to block other users in Google Drive, Google said in a blog post last week -- two years after announcing that it was working on the issue.

Google says the new tool allows a user to:

The feature is available to all Google Workspace customers, G-Suite Basic and Business customers, and holders of personal Google Accounts.

The rollout began on July 22 and will be phased in gradually over a period of 15 days.

Google’s announcement did not meet with universal applause.

ArsTechnica said in a headline that “Google is finally doing something about Google Drive spam,” and then said the solution is “woefully inadequate.”

“It’s like email, but while Gmail has plenty of spam controls, Drive has historically had very few,” the article states.

“For years, Drive has been an uncontrolled mess of spam for some users, and the only solution has been to use the entire service less and block it from sending emails and notifications,” ArsTechnica says.

But Google states: "User blocking will not only preserve Drive sharing’s helpfulness, but most importantly preserve the safety of Drive users.”

It adds that there is no admin control for the blocking feature.