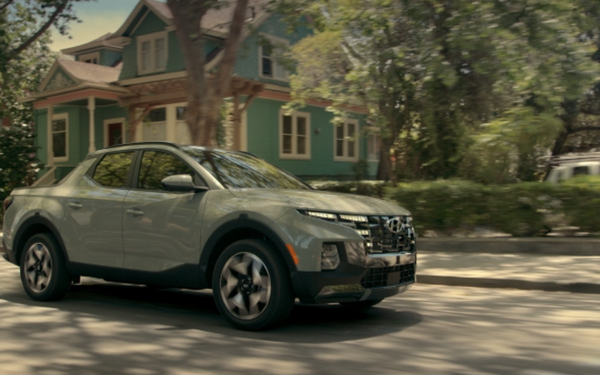 Hyundai Motor America is launching two separate efforts for its Santa Cruz and soccer sponsorship, both from AOR Innocean USA.

For Santa Cruz, which the automaker calls a SAV (sport adventure vehicle) as opposed to an SUV or crossover, Hyundai is partnering with former professional skateboarder and documentary filmmaker Stacy Peralta, and local legends of Santa Cruz, California.

“The Santa Cruz is a new type of vehicle that combines SUV benefits with open bed versatility to enable the adventures that make journeys fun,” Zepeda says in a release. “This digital-first campaign is all about showing the adventure and lifestyle this unique vehicle can deliver for people who live in the city but are driven by nature and outdoor activities.”

Hyundai also will run digital pre-roll targeted directly at the Santa Cruz’s adventure-minded audiences. Thirty- and 15-second TV spots with footage from the “Journey Through Santa Cruz” shoot will air on national broadcast, including during "Sunday Night Football "on NBC.

Separately,  Hyundai has teamed with Univision as the new presenting sponsor of Sábado Futbolero (Saturday Soccer).

The campaign, #BecauseFútbol, features three new Spanish-language TV spots. It highlights the fan rivalry between Chivas and Cruz Azul of Liga MX, the most-watched club soccer competition in the U.S.

During the Sábado Futbolero broadcast, Hyundai will also have a custom opening sequence that was developed in collaboration with Univision, logo placements on various graphics and in-game virtual ads.

The integrated campaign will include custom social content and a call to action for fans to share their club passion.