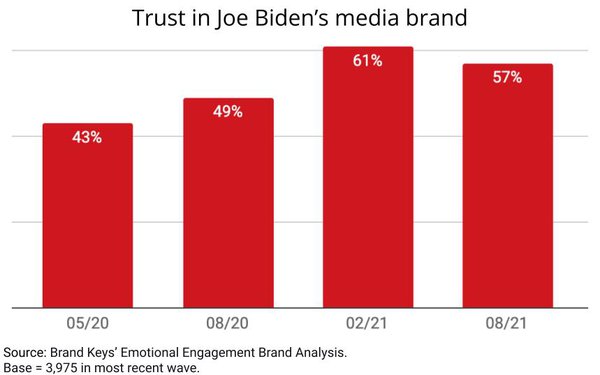 Trust in Joe Biden's media brand has slid from his initial post-election bounce, but still remains above water, with more than half of Americans surveyed this month by Brand Keys indicating they trust his brand.

The results are part of a survey Brand Keys has been conducting for MediaPost for the past several years to identify the contribution the explicit value of "trust" contributes to engagement with media brands, and this survey mainly analyzed TV network news brands (see table below), but President Biden's scores were included as part of it in order to benchmark the trust Americans have in his brand -- something Brand Keys also did during the last President's administration.

The results are based on Brand Keys' proprietary emotional engagement analysis of 3,975 respondents balanced for gender and political affiliation and from from nine U.S. Census regions.

In this wave of research, eight of the nine TV news brands examined showed trust levels declined, with one exception: Fox News.

Brand Keys Founder and President Robert Passikoff attributed recent declines in TV news viewership to a distinct lack of what Brand Keys describes as "Trump-tension," an allusion to his near-daily monopolization of media platforms -- particularly television news -- during his presidency.

"Because engagement assessments correlate very highly with viewer behavior (0.80+), dips in “trust” have seen concomitant dips in viewership," he noted.

“We believe as people returned to a semblance of pre-COVID normalcy, viewers quite literally ‘tuned out’ the news,” Passikoff concludes. 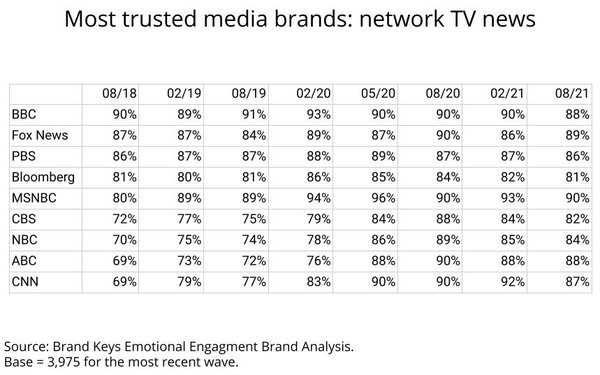