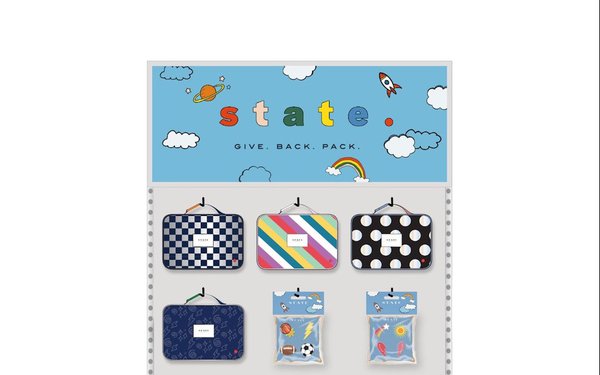 State Bags is taking a giant step, making its first foray into both lower-end bags and physical retail by launching a back-to-school collection at Target.

Jacq Tatelman, co-founder and CEO, says she’s been yearning to try a mass collection for a long time, especially if it could happen with Target.

With its $100 kids backpacks and $160 grown-up fanny packs, State Bags are both trendy and expensive. “We always wanted to do a line that was more accessible,” says Tatelman, who started the company with husband Scot some 13 years ago. “It was very important to us from the get-go. We know our bags aren’t attainable for everyone.”

The company, a certified B-Corp (a for-profit company that aims to “balance profit and purpose” according to that certification’s website) was launched to help New York City’s underprivileged kids. Since then, it’s been channeling people’s appetite for trendy accessories into innovative charitable efforts.

The initial idea came from trash bags. “Scot and I had started a week-long camp for about 250 kids in New York,” Tatelman tells D2C FYI. “And so many kids showed up with all their things in torn plastic bags. Many were in transitional housing or foster care.”

So the couple launched State Bags, with the hope of combining the style sense she developed as a buyer at Henri Bendel with new ways to help kids.

At first, it donated a backpack for every bag it sold, developing signature bag-drop rallies -- complete with DJs -- that made everyone feel good. That’s the kind of one-for-one model that powered companies like Warby Parker and Toms Shoes into household names.

But last year was a rough ride for the company, which had grown fast through 2019. “I took over as CEO last February, just as we were about to introduce our luggage,” Tatelman says, “just as COVID-19 was starting. People weren’t traveling. They weren’t going to school. They weren’t buying bags.”

The company furloughed most of its team for several months and started to rev its engines again by May. The company says its back-to-school sales for 2020 gained 45% from the prior year, despite the fragility of school calendars.

And because of the company's ties to nonprofits serving the at-risk communities, “we knew firsthand how hard things were for families. It was devastating because, initially, many of the nonprofit organizations that help were kind of frozen. Nobody knew what would come next.”

Then, as the company began looking ahead to a gang-busters back-to-school season, it finally landed a meeting with Target. “A few days later, we got the go-ahead to build the collection for them.”

The Target partnership offers just the right design sensibility, says Tatelman. “I’ve always enjoyed the different brands they bring in and how they present them.”

The State Bags Target collection includes its best-selling Kane backpacks for $50 and matching lunch boxes for $25. Target intends to sell them in some 600 stores, with a dedicated endcap.

Ultimately, the Target partnership, which Tatelman hopes will continue beyond back-to-school and eventually include luggage, will help State Bags continue to find innovative ways to help kids in need. “We ran a virtual tutoring initiative last year, where 150 kids got free one-on-one tutoring from tutors across the country, for example.”

With the Target collaboration, “we’ll be able to speak to a larger audience. Even though it is at a lower price point, we’re not sacrificing style. And I know as long as the quality is good and our bags look beautiful, people are going to love them.”