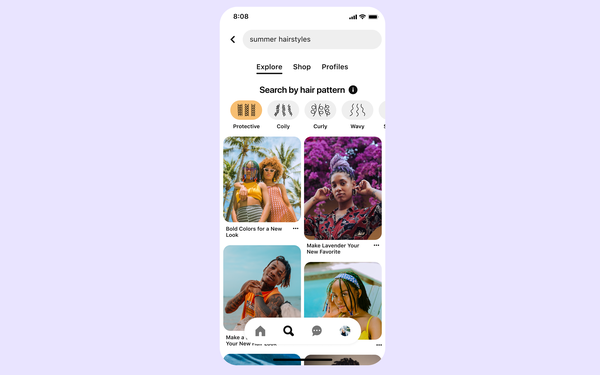 Pinterest did something new with a technology that detects objects. Powered by computer vision, it detects hair patterns, allowing users to search for specific types of hair in more than 500 million images -- on the platform.

In the coming weeks, when someone searches on Pinterest for a broad hair search term like “glam hair," they can then narrow their search results to one of the six different hair patterns -- such as protective, coily, curly, wavy, straight, and shaved or bald.

Creating the search feature, Pinterest’s Head of Inclusive Product Annie Ta worked with black, indigenous people and people of color like Naeemah LaFond, an editorial hair stylist and global artistic director at Amika, to help build and design the product.

LaFond believes the new tool marks a much-needed milestone for racial equity in the world of coding.

She advised on the overall user experience and language used in the app along with third-party experts who ensured the inclusion of diverse users and perspectives in developing the product.

Building a diverse and inclusive product meant more than “considering people of color in the development cycle, but rather putting them first,” according to Pinterest.

This announcement marks another major step forward in technology and furthers Pinterest’s commitment to having 50% of its content come from creators in underrepresented groups. Those group are based on how they identify themselves.