Space No Longer The Final Frontier: Dentsu Enables You To Travel There Via Your Phone 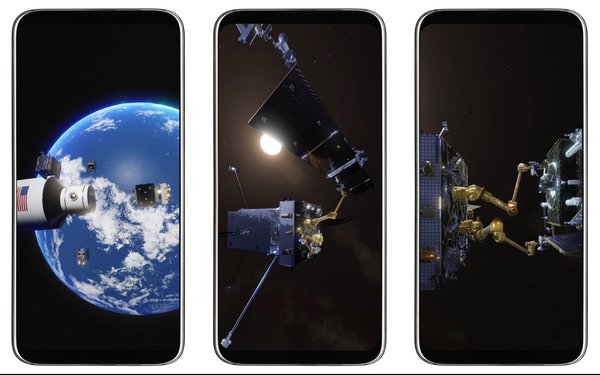 “Portals to Space” invites anyone with a smartphone to experience two Northrop Grumman spacecrafts ––  the Mission Robotic Vehicle (MRV) and Mission Extension Pod (MEP) –– as they repair and refuel dying satellites in orbit.

One’s immersive AR journey begins with a full view of Earth's glowing surface and the twinkling of nearby satellites.

A spacecraft soars by at 17,000 miles per hour, dropping off the MRV with its expanding antennas and solar panels. While floating 22,000 miles above Earth, the mission itself is described in detail by a voiceover.

With a full 360-degree view, there is little limitation to what a user can virtually see. Depending on where one turns, the Milky Way and Atmos 360 are fully visible.

“By using AR, we're telling Northrop Grumman's story in a tech-forward way by allowing viewers to ‘step in’ to space,” said Craig Cimmino, executive creative director at dentsuMB. This emphasizes “the importance and difficulty of the mission, while giving users a sense of awe and wonder.”

While the commercial space industry makes waves with expeditions by billionaires Jeff Bezos and Richard Branson, Grumman is focused on more practical issues. Like servicing and expanding the lives of dying satellites, a sure-fire way to cut down on future “space junk.”

According to Grumman, this is a key component in “making space exploration sustainable and effective.”

However, less “flashy” news sometimes demands more creative coverage, which is now more possible than ever before.

Due to an increase in 5G networking, with revenue forecast to grow 39% in 2021, augmented reality has become an actual reality for advertisers, brands, and users. Faster networks mean less lag time for mobile. Which means more accessibility to successful AR experiences. Like “Portals to Space.”

Between Google's popular 3D animal AR, a dramatic uptick in sales of AR glasses, and Apple's inclusion of LiDAR scanners in their top-tier iPhones, not to mention their massive AR platform, augmented reality is something advertisers may want to seriously consider.

“As a technology leader, Northrop Grumman is creating incredible innovations in space,” said Cimmino. “It is sometimes hard for people to understand the breadth and depth of their space technologies without a compelling visual. So ‘Portals to Space’ is a way to give the audiences a chance to not only see, but experience, the next generation of solutions in space.”

Sean Wilson, director of media and public relations at Northrop Grumman, agrees, hoping the AR experience -- with its precision, scale and speed -- helps viewers understand the reality and importance of MRV and MEP’s mission.

“No one else has demonstrated this capability in space,” said Wilson. “It is truly a first-of-its-kind technology.”