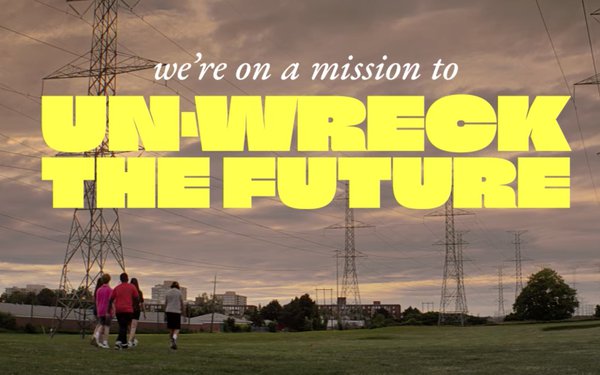 Is it possible to “Un-Wreck” a future threatened by such seemingly insurmountable challenges as climate change and food waste?

That’s the question five kids try to tackle in a campaign from granola bar and snack brand MadeGood, with creative elements strongly evocative of the “Stranger Things” series on Netflix.

Launched in 2013, MadeGood has publicly committed to “rigorous social and environmental standards,” including reducing greenhouse emissions in its operations and using 100% recyclable packaging by 2025 (the company's currently at 84%).

The “Un-Wreck The Future” campaign is a purpose-driven departure from previous MadeGood advertising.

“It was all very much focused from a messaging standpoint on the functional benefits of the brand,” says Milana Kleidman, brand manager at MadeGood parent Riverside Natural Foods Ltd. “This is definitely a different go-to-market strategy where we are looking to go beyond communicating those functional assets and building an emotional connection with consumers.”

The “bull’s-eye target” is millennial parents.

In this long-form video from Broken Heart Love Affair agency, MadeGood products are neither seen nor mentioned. It opens with three boys and two girls hanging out in a basement, riding bikes around the neighborhood and playing at a baseball field.

Their never-ending dialogue alternates between optimism and skepticism that anything can be done to save the planet.

“What if we froze everyone for 1,000 years to give earth time to heal?” asks one of the boys.

To which one of the girls responds, “You watch way too much science fiction!”

This 60-second spot, titled “Intergalactic S.O.S.,” shows the youths dragging ragtag communications gear up a steep slope to send out a message for help—not unlike the way the young actors in “Stranger Things” relied on ham radios to communicate with each other.

“I don’t think it’s directly inspired by ‘Stranger Things’ -- but obviously with the kids and the quirkiness of the actors, there’s definitely some similarities,” says Kleidman. “There’s a bit of nostalgia in general happening in the market today. We’re drawn to simpler times -- and in a way, [the spot is] reminiscent of simpler times.”

Running in Canada and the United States, “Un-Wreck The Future” is “primarily a digital-first execution” augmented by ads on streaming platforms including Hulu, Roku and Samba TV.