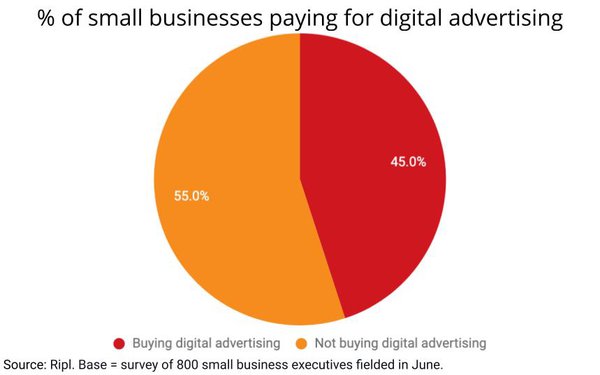 Small business owners are increasing their ad spend on digital media, but aren't necessarily reaping the benefits, according to findings of a new study by Ripl Inc., a developer of marketing software and subscription services for small businesses.

The findings suggest that a lack of knowledge and/or sophistication is holding them back, something other recent research studies have also found.

The study, based on a survey of 800 small business executives’ online ad usage and spending, found that 45% are currently spending money on digital advertising, averaging a monthly budget of $534.

Of the 55% of respondents who said they are not currently paying for digital advertising, nearly two-thirds (60%) cited three specific reasons for not buying it:

“Too modest a spend may mislead them to think an ad was not effective, when in fact it was just not seen,” said McDaniel in a recent press release. “In other cases, owners are simply confused by the process and create ads that get rejected by Facebook or Instagram, or don’t understand the metrics,” he added.

The findings also reveal a "shortfall in perceived success, especially among those who are spending the least.”

Fifty-one percent of those who are currently spending on digital advertising report being either “somewhat satisfied” or “dissatisfied” with the effectiveness of their digital ad spend.

“While it is well known that many major brands have fully embraced online advertising,” said Theo Walker, Ripl's head of customer insights, “there has been very little research available to date on small business usage and satisfaction in this arena.”

The self-reported study, while dealing primarily with small businesses, points to a dichotomy between big advertisers and small businesses advertising with digital media.

In May of this year, the American Economic Liberties Project published an article showing how difficult it is for any small business to succeed on Google and Facebook.