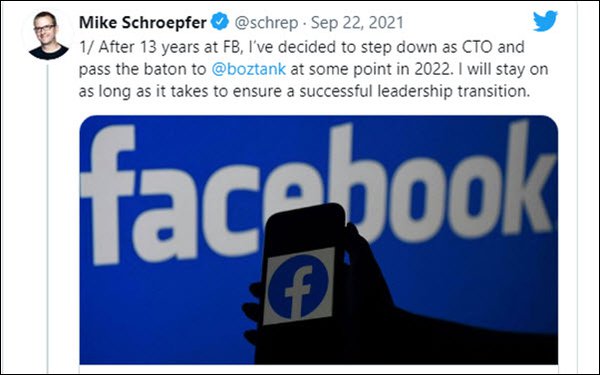 Mike Schroepfer, Facebook’s chief technology officer of 13 years, has announced that he is stepping down from that role.

Schroepfer, who informed Facebook of his decision on Monday, will transition to a part-time role. Next year, Andrew “Boz” Bosworth will succeed him as CTO.

As CTO, he will continue to oversee the Facebook Reality Labs division and augmented- and virtual-reality initiatives — key components of Facebook’s business strategy going forward.

The company recently announced new smart glasses in partnership with Rayban, as well as the latest generation of Portal video-calling devices.

While the timing may be coincidental, the change in technology leadership follows the most recent wave of negative revelations about the company’s platforms — including The Wall Street Journal’s exposés on Instagram’s negative effects on teens’ mental health and Facebook’s use by Mexican drug cartels, and The New York Times’ report on the company’s use of content seeded in Facebook’s News Feed to try to burnish its image.