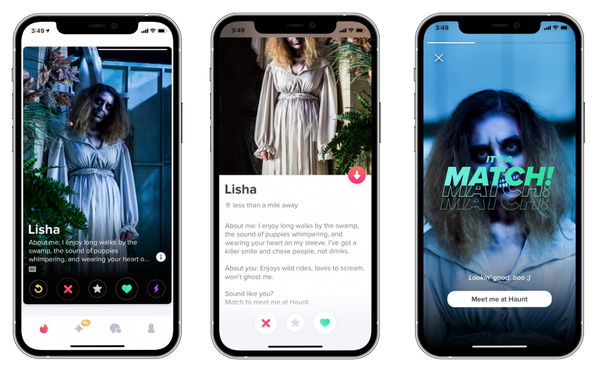 Cedar Fair, which runs 13 amusement parks nationwide, is asking Tinder users to “Swipe Right for Fear” and match with monsters from their Halloween “Haunt” cast of monsters.

The effort, from Cramer-Krasselt, is aimed at Tinder’s sweet spot audience: 83% of users are ages 18-35.

C-K has created numerous Halloween-themed campaigns. Some content was fun, some scary, and some were even rejected as too scary to be paid YouTube ads ("The Depths" and "Trick or Treats.")

But the ultimate “scare” is for sure dating, per the company.

"This is about reaching our audience in an unexpected way that gives them an opportunity to interact with us before they even get to the park,” says Kelley Ford, Cedar Fair CMO, in a release. “Our Halloween Haunt events have always been a popular date night for young adults and Tinder users fall squarely within that target audience. So, playing with the idea that dating can be scary is a smart, relevant and fun way to catch their attention and get them excited to visit us.”

Tinder users can match with Lisha, a banshee whose profile says she enjoys “long walks by the swamp, the sound of puppies whimpering, and wearing your heart on my sleeve…” or Chuck the butcher, who is “Butcher by day, butcher by night…I enjoy roleplay, munching fresh fingernails, and chasing victims through mazes…”

Once users swipe and match with Lisha or Chuck, they’ll receive their own creepy invite to Haunt.

The “scare-acters” will also appear in a 15-second dating profile video featuring their best one-liners, which will run in dating content on streaming-platforms leading up to Halloween.

A cross-channel digital and social campaign will also be activated on Facebook, Instagram plus digital, OOH and programmatic placements, to promote the overall Halloween “Haunt” event.

The amusement park company is no stranger to dating content: in January 2020, ABC’s “The Bachelor” filmed an episode at Cedar Point in Sandusky, Ohio.