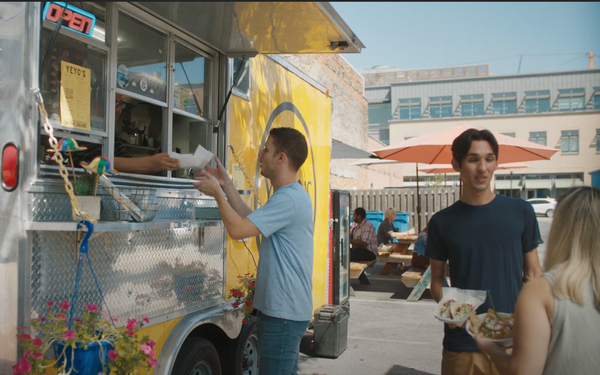 The Northwest Arkansas Council has launched an effort, focused on relocation instead of tourism, that takes on the likes of Texas and the Pacific Northwest in attracting tech, creative and other talented employees to the state.

Themed “Life Works Here,” the campaign from creative and media agency Walrus takes a light-hearted approach while highlighting all that Northwest Arkansas has to offer.

“There is incredible momentum in the region right now,” says Nelson Peacock, president and CEO of the Northwest Arkansas Council.

A series of TV spots paint a picture of NW Arkansas, which includes the headquarters of three Fortune 500 companies, startups, biking, aviation, art and food. It is told from the viewpoint of a relocator who explains the destination choice to their friends and loved ones.

While the effort might seem to target younger people, it really taps anyone “at the top of their game,” says Jillian Dresser, creative director at Walrus.

“There are currently over 10,000 open jobs in NW Arkansas,” she tells Marketing Daily. “Northwest Arkansas was built by entrepreneurs and there's a robust ecosystem to support them. We want people to think that NWA is where the ambitious come to craft a fulfilling life.”

The campaign also includes OOH and short-form social videos and is rolling out across Seattle, Denver, Minneapolis and Austin markets. One OOH display cheekily proclaims "Everything's bigger in Texas, including the mortgage payments."

Two digital activations includes a slideshow generator allowing consumers to create a funny PowerPoint presentation to help them explain to friends and family why they are relocating to NW Arkansas, and the other will be a Zillow “Smack Down” which is a website where people can plug in their current city and view a competitive Zillow home listing in NW Arkansas.

This is the first major advertising push from Walrus for the Northwest Arkansas Council. The agency was tapped in 2020 to lead branding, logo and tagline for a regional moving incentive program created and launched in partnership with FleishmanHillard that encouraged people to consider NW Arkansas. That campaign generated 30K+ submissions.