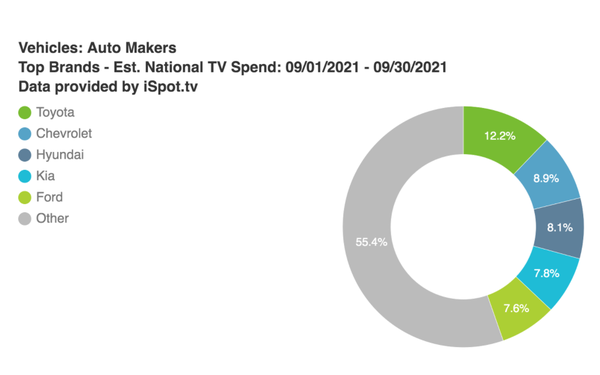 Automakers spent almost $12 million more this September on national television ads compared to a year ago but impressions were down, according to iSpot.tv.

Toyota emphasized tentpole events in September, as over 55% of the brand’s national TV ad spend came during NFL games, with 5.5% during the MTV Video Music Awards and 2.9% during college football. For Chevrolet, emphasis was on broadcast networks -- as about 84% of national TV ad spend was utilized on NBC, Fox, ABC and CBS.

September quickly shifted auto brands’ TV ad impressions toward football’s return and an emphasis on weekend afternoons -- the source of 15.8% of industry impressions for the month (second only to primetime). During September NFL games, six different automaker brands had at least 100 million impressions.

“Brands were eager to get in front of the largest live TV audience around to present 2022 vehicle inventory,” Schwartzapfel says.

The big four broadcast networks and ESPN combined for about 34% of all automaker TV ad impressions, in part due to football (as well as the return of network primetime schedules). Cable news also played a larger role delivering impressions for auto brands, as Fox News, MSNBC and CNN were all among the top 10 networks for auto impressions.