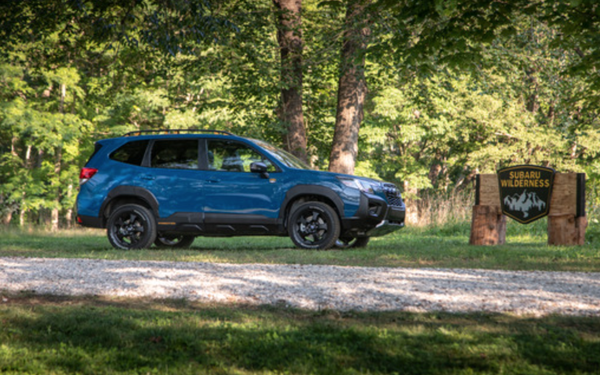 Subaru of America is expanding its offerings with a new Wilderness-badged Subaru Forester, whose target will skew younger and more male than the standard model.

The vehicle is expected to be available at dealers in early December.

The standard Forester is already a pillar for the brand, says Michael Redic, Subaru car line planning manager. More than 2.3 million Foresters have been sold in the U.S. and nearly one in five Subarus sold is a Forester.

Demand for the base vehicle is outstripping supply, with only a very low two days supply currently, he says.

The more rugged Wilderness-badged Subaru brands are aimed at outdoor enthusiasts. The number of participants in outdoor recreation has been trending upward since 2008, Redic says.

The target buyer for the Forester Wilderness vs. the standard Forester is mid-30s versus mid-40s, and skews more male. The target psychographic is a “rugged outdoor enthusiast” versus “active lifestyle.” These consumers are more likely to participate in rock climbing and backpacking versus hiking and camping, which is common with the base Forester owners.

That gives it a point of distinction from competitors such as the Jeep Wrangler. While every bit as capable, the Subaru Forester Wilderness aims to be perceived as safer and more comfortable, he says.

The Forester Wilderness will offer a different transmission from the standard Forester model -- which doubles its towing ability from 1,500 lbs. to 3,000 lbs.

The Wilderness is also equipped with 17-inch wheels with Yokohama Geolander all-terrain tires aimed at giving improved off-road performance with minimal sacrifice to on-road performance. Compared to standard tires, they provide increased driving performance in mud, rocks and gravel and are designed for better puncture resistance.

I recently had the opportunity to take a Forester Wilderness both off-road and on-road, and can attest that while it is extremely capable of handling the most treacherous off-road course, it’s still very comfortable on the highway, with low noise, vibration and harshness.

The vehicle I drove featured an engine capable of 182 horsepower at 5,800 rpm and 176 lb.-feet of torque at 4,400 rpm.  It felt a little sluggish going from 0-60 mph, but Subaru makes no pretense that this is a “sporty” vehicle. What you sacrifice in speed you make up for in off-road capability, which is what the target customer values most.

The Outback and Forester Wilderness feature  9.5-inches and 9.2-inches of ground clearance, respectively, which no midsize or compact SUV competitor currently exceeds.

Subaru launched its first creative for the Wilderness family of vehicles on Sept. 20 for the Outback -- a good indicator of the approach it will take for the Forester Wilderness.

The 30-second “Go Further” from Carmichael Lynch features two young men making their way up a mountain in the Subaru Outback Wilderness, outfitted with higher ground clearance, a ruggedly clad exterior and aggressive off-road wheels “designed for paths not yet taken,” per the automaker.

In the end, the rugged new Subaru Outback Wilderness transports the two friends even higher than their nerves can handle -- right to the edge of the mountain.

The Subaru Forester Wilderness is definitely capable of the same.