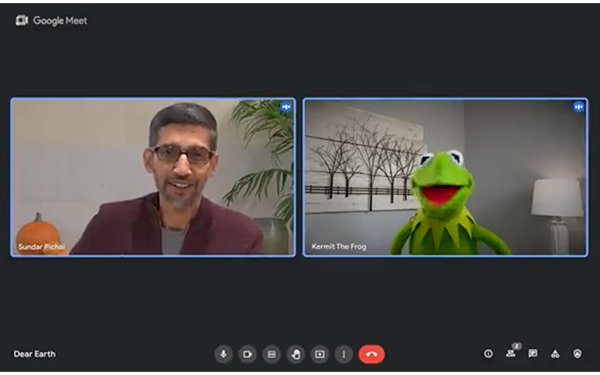 Google created a video on climate change, Dear Earth, running on YouTube Originals. In the promo of the video, Google CEO Sundar Pichai spoke with Kermit the frog about climate change, but initially forgot to unmute his microphone on Google Meet.

“Sundar, you’re on mute,” Kermit said. “I can’t believe I’m talking to the CEO of Google and he’s on mute.”

The YouTube Original is focused on climate action and change, as well as what people can do to help the planet.

After they both exchanged a mutual admiration for each other, Kermit said “I have learned so much searching on Google. For instance, do you know there are approximately 8,384 species of amphibians in the world.”

Pichai then wanted to know whether Kermit ever watches anything on YouTube. Kermit said that’s how he learned how to play the ukulele. While Pichai doesn’t play the ukulele, he does watch cricket, football and cooking shows.

The message of the video focuses on climate change as the leaders of the world ready to gather at Cope26, which takes place in the UK between November 1 and 12. Google has been a major proponent of protecting the earth.