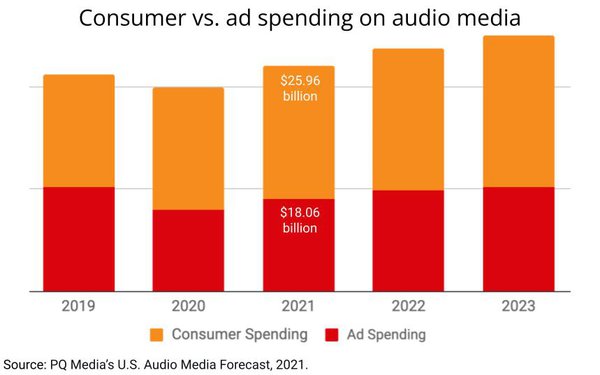 With podcast ad spending projected to surge 32% this year, advertising/marketing will be the fastest growing source of audio media revenue this year, outpacing the increase in direct consumer spending by a wide margin -- +14.4% vs. +8.3%, according to the 2021 edition of PQ Media's annual U.S. Audio Media Forecast report.

The report, which is being released today, however, finds that direct consumer spending on audio subscription services continues to be the dominant share of the marketplace, accounting for 59% of the $44.02 billion the U.S. audio media industry -- both conventional radio, as well as digital audio services -- will take in this year.

“Audio has proven to be a resilient medium since its rise to the fore of the media spectrum in the 1920s, continually adapting to strong challenges posed by the emergence of new technologies, such as television in the 1950s, as well as related changes in consumer behaviors and shifting ad budgets," notes PQ CEO Patrick Quinn.

The good news for the overall medium, regardless of revenue stream, is that consumer consumption of audio continues to rise as new platforms and formats expand. PQ estimates the average American consumer will boost their time spent listenting to audio media this year by 3.3%, rising to an averaeg of 13.7 hours weekly. 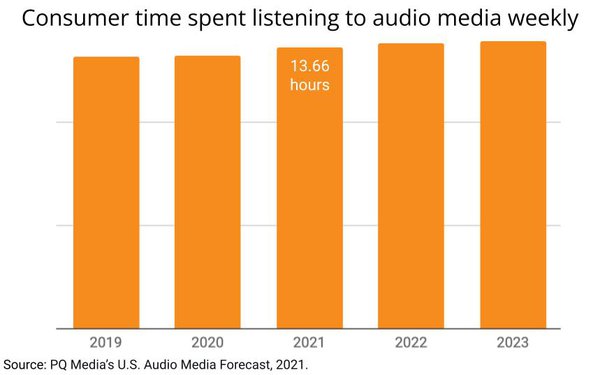