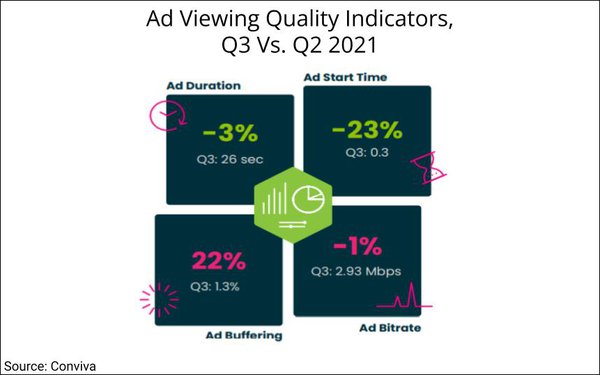 Streaming viewing time, already up 266% globally over the past three years, jumped again in Q3 — by 21%, according to the latest State of Streaming report from Conviva.  Africa led growth, at +273%, while North America continued modest growth (+2%). 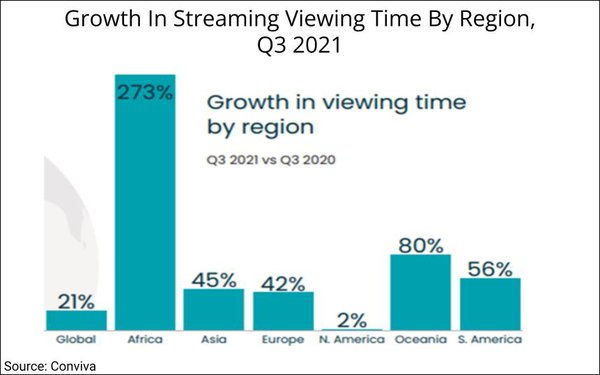 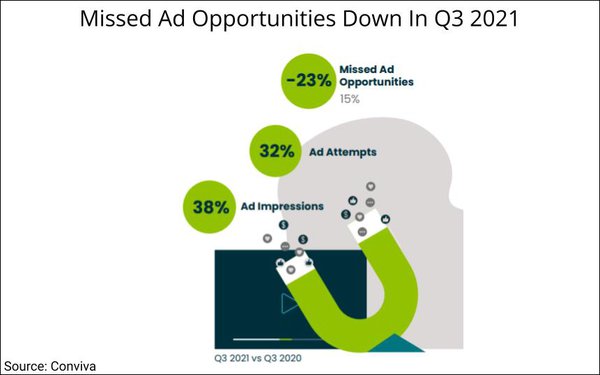 The ongoing improvements reflect leading streaming publishers’ continued focus on real-time analytics and intelligence to optimize user experience and maximize return on investment, according to the report. “As advertising quality improves and more advertisers see the value of doubling down on their investments in streaming, the caliber, relevancy and overall ad experience for consumers is likely to improve as well,” it adds.

From the standpoint of viewers’ experience of ads, or ad quality, the picture was more mixed (chart top of page).

Globally, ad start time was down 23% versus last quarter and — in a positive development for consumers who report wanting shorter ad breaks — ad duration decreased 3% versus Q2, to 26 seconds.

But ad buffering increased 22% compared to last quarter, to a rebuffering rate of 1.3%, and picture quality also worsened slightly: down 1%, to a 2.93 Mbps average bitrate.

“As competition continues to heighten and consumer dollars are increasingly spread thin across platforms, quality of the ad viewing experience will be an important factor in keeping viewers engaged for more monetizable minutes,” stresses Conviva.

But users’ overall streaming experience on technical aspects continued to improve on nearly all fronts. 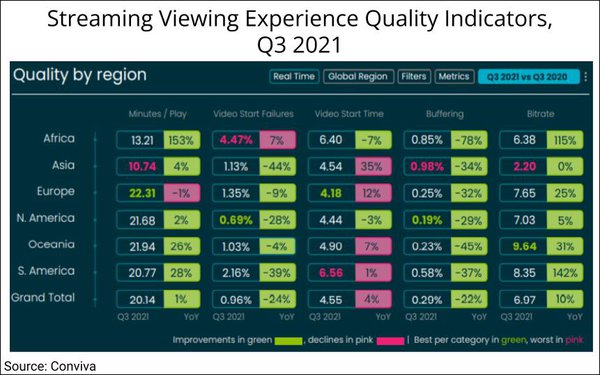 Buffering declined 29% in North America, which maintained its lead as the region with the least buffering, at 0.19%.

Video start failures decreased for every region except Africa. Picture quality (bitrate) was up 10% globally and 5% in North America.

Video start times were the exception to the positive trends, with just two regions showing decreases versus Q3 2020: Africa down 7% (to 6.4 seconds) and North America down 3%, (to 4.44 seconds). Europe had the best start time, at 4.18 seconds, despite an increase of 12% in the period. 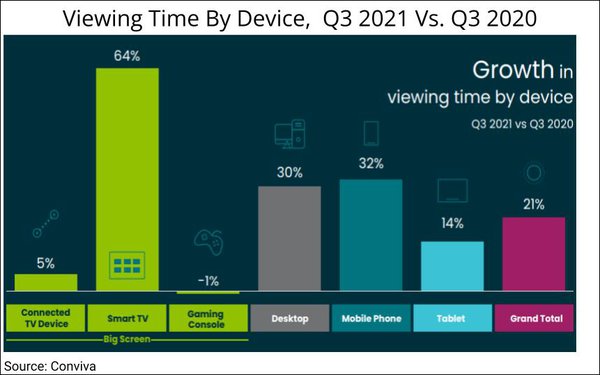 The Q3 report’s streaming data was collected primarily from Conviva sensor technology embedded in nearly 4 billion apps on streaming devices, and its social data from more than 2,800 accounts and 18 billion engagements across Facebook, Instagram, TikTok, Twitter and YouTube.