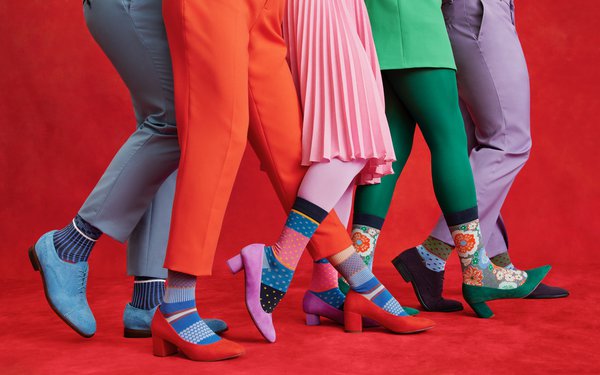 Who says socks make lame holiday gifts? Bombas doesn’t think so. It’s rolling out a new campaign that tweaks its “buy one, give one” philosophy for more seasonal spirit.

Themed “Made to Give,” the out-of-home, TV and digital ads highlight the company’s philanthropic model as well as the “ooh-ahh-able” softness of its clothes. The ads also go one step further, with copy that explains Bombas is “Made for you. Made for those in need. Made to give.”

The company has focused on clothing donations since its launch in 2013. It started with socks, since they are the most-requested item in homeless shelters. Earlier this year, it began selling underpants and T-shirts, which are the second and third most-requested items.

“That’s always been the most exciting thing about our products,” says Paulina Reyes, Bombas’ vice president and creative director. “So this campaign creates a double entendre. Besides giving to people in need, Bombas makes a great gift for someone you love.”

The campaign highlights the expansion and Bombas' push to “become a premium basics brand,”  says Lauren DiGregoria, director of acquisition. Besides conveying the company’s philanthropic difference, “we’re trying to reach people who might not have known about us before,” at least in new product categories.

“Our media mix reflects that,” she says, including cable and streaming. Bombas is also using still photography in multiple digital channels. “We want this to be a cohesive campaign that feels celebratory, with the movement aspect carrying throughout the marketing plan and the media mix,” DiGregoria adds.

Reyes says the company chose contemporary dancers to make sure the ads capture the brands’ characteristic optimism and energy. Dancers-as-models “can express so much with movement, including the joy of giving and sharing and receiving.”

Bombas is hardly the only brand built on that generosity. Popularized by Tom’s back in 2006 (the shoe company has since backed away from the concept), one-to-one giving is core to other D2C brands like Warby Parker, the D2C vision company, and State, which makes backpacks.

Since its launch, Bombas says it’s donated some 50 million items, and it tries hard to balance that philanthropic mission with product advertising. “It’s about staying true to who we are,” Reyes says.

That includes channeling the brand's big personality, including its “Bee Better” mantra, built into every item. (The brand’s name is a derivative of the Latin word for bumblebee.) Its hive mind is focused not just on respect for customers, but also for the community it serves.

Donation socks are double seamed, for instance, and made in dark colors, which are most requested. “And there are antimicrobial treatments too,” Reyes says. “We’re just trying to make products people fall in love with, as well as what the homeless community needs.”

The company’s light-hearted culture pays off in other ways, recently landing it high on Fortune’s list of best retailers to work for. “We’re optimistic, and even idealistic,” says Reyes. “But we don’t take ourselves too seriously.”