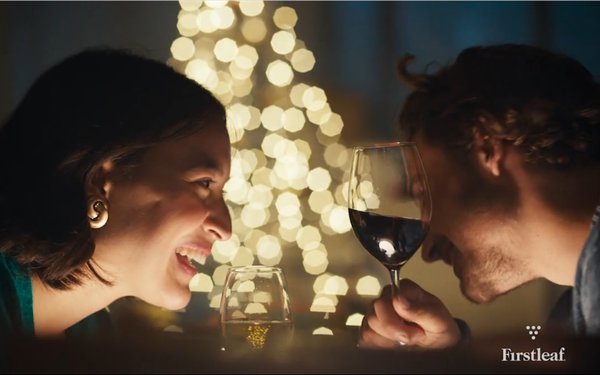 Two campaigns for direct-to-consumer wines have launched, one from Firstleaf, a major player in subscription wine clubs, the other from Public Goods, a major player in household essential membership programs, but an alcohol neophyte.

Firstleaf worked with two Netherlands-based shops -- creative agency DPDK and production studio Hazazah – on “Celebrate Firsts,” featuring a 30-second commercial that spotlights a couple’s relationship from  their meeting to their first family holidays.

“Firsts are special. They mark our moments of discovery in life,” begins the spot’s narrator, ending with, “May we enjoy them with the people we love, from the first sip to the last.”

The ad will run through year’s end on such cable networks as Bravo, CNN, MSNBC, Crime & Investigation, E!, ESPN News, FX Movie Channel, Travel Channel and TV Land, and will stream on Hulu and Peacock.

A second “Celebrate First” spot is set to debut in January.

Backing up its campaign, Firstleaf shared survey results that found 82% of respondents agreeing that nothing is more memorable than experiencing something for the first time, with their most “memorable firsts”  first jobs (49%), first loves (48%), first kisses (45%) and first pets (41%).

Continuing on the “memorable first” concept, Firstleaf has also launched a sweepstakes in which entrants are asked to share their favorite first moments through New Year’s Eve by submitting short written summaries or photos. The grand prize is a choice of five adventure trips ranging from a private Napa Valley wine tasting tour and hot air balloon ride, to a hike and Chianti wine tour in Florence, Italy

Ten other entrants will win more local experiences -- from skydiving and bungie jumping to rafting and “goat yoga.

Public Goods, meanwhile, has taken off on the video yule log theme with continual visuals and sounds of wine pouring, bubbling and swirling.

The brand today launched Wine TV, a one-hour, 46-minute You Tube video that it suggests be played on a continuous loop for background entertainment.

Wine TV marks the private-label D2C membership retailer’s entry into alcoholic offerings with the launch of six under-$20 private-label organic wines from around the world: Bordeaux and Rosé  from France, Prosecco and Pinot Grigio from Italy, Red Blend from Chile, and Chardonnay from California.

Public Goods, whose competitors in the retail membership space include Thrive Market, said it continues experiencing a pandemic bump, with membership doubling since last year, and revenue growth of over 200% since the pandemic’s height.

The wine launch will be supported with earned and paid social and digital promotion, with the main activation taking place via the YouTube video.

The Wine TV video was directed and produced by Daniel Schloss of Schloss Creative.