Is Social Media Making Us Nuts? Most Americans Think So 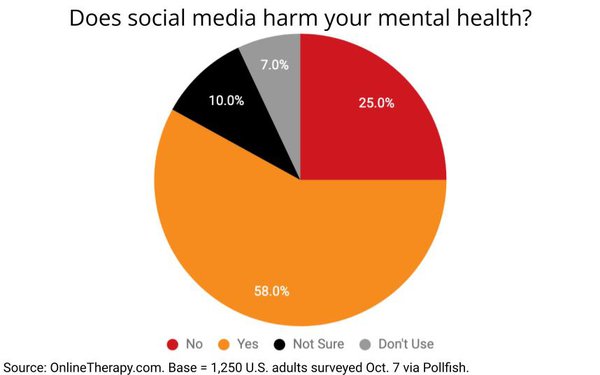 It has become a big question lately: Are social media platforms negatively affecting users’ mental health? And if so, how and to what degree? Now, a new study conducted by an online therapy directory service finds a majority of Americans -- 58% -- say they have experienced negative mental health effects from using social media.

The study from OnlineTherapy.com, which is based on a survey of 1,250 U.S. adults conducted via Pollfish on October 7, found only 25% said their mental health has not been negatively affected, while 10% said they were unsure and 7% said they don’t use social media at all.

According to OnlineTherapy.com’s report, anxiety was the leading side effect of social media use, with 64% of those negatively affected. Other side effects included depression (56%), dissatisfaction with life (52%), fear of missing out (52%), and body-image issues (51%).

Unfortunately, social media has been shown by some studies to be incredibly addictive, mostly due to the predatory purposes of platform algorithms. With uncontrolled targeting of this kind, users are likely to experience misinformation, leading to a lack in critical thinking abilities.

OnlineTherapy’s report showed that 71% of those who experienced mental health issues from social media blamed misinformation and disinformation.

Other causes amongst those surveyed included one’s perception that others’ lives are perfect (60%), cyberbullying (59%), and unrealistic body standards (57%).

The survey also collected specific information surrounding the levels of harm that social media has inflicted on users of various ages, genders, races, and ethnicities.

Sixty-five percent of men reported that social media use negatively affected their mental health, compared to 49% of women.

Seventy-three percent of Asians said social media had a negative impact on their mental health, followed by 62% of whites, 43% of Hispanics/Latinos, and 40% of Blacks.

Body image issues were another area of interest in the report, which were affected by social media at a similar rate for men and women. Fifty-two percent of men, and 49% of women, who experienced negative mental health effects from social media name body image issues as a challenge they’ve undergone.

Black social media users reported that unrealistic body standards were the greatest source of harm, while whites, Asians, and Hispanics/Latinos named misinformation and disinformation as the most damaging aspect of social media platforms.

Fifty-six percent of whites and 53% of Hispanic/Latinos report being dissatisfied with life as a result of social media use, compared to 36% of Blacks and 32% of Asians.