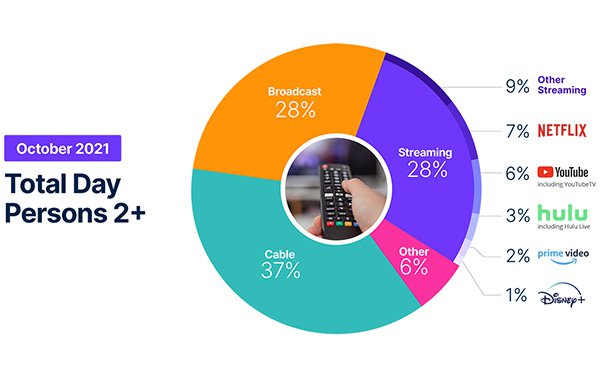 An October reading of Nielsen’s “The Gauge” now says streaming broadly accounts for a 28% share of total TV usage among persons 2 years and older -- the same levels since June.

Still, there were some micro-changes from month to month.

“The Gauge” is a monthly “macro-analysis” of TV consumption derived from two separately weighted panels. Streaming data comes from a subset of streaming meter-enable TV homes within the national TV panel.

Broadcast moved up two percentage points in October to a 28% share versus September. Nielsen says total TV consumption rose by 0.5% in August-- boosted by broadcast TV, which was up 2.9% versus July -- largely due to the Tokyo Summer Olympics.

Cable TV still commanded the biggest share -- now at 37%, down from 38% in September.

Streaming’s October 28% share mark has stayed since June -- but up from 26% in May, the initial reading of “The Gauge.”

The “other” streaming category stayed at 9%, the same since August.

Nielsen also calculates an additional overall “other” category, now at 6%. This is primarily unmeasured video-on-demand tuning, streaming through a cable set-top box, gaming and other devices, such as DVD players.

For the August period, Nielsen says streaming was “relatively flat,” taking a more granular view, streaming among kids 6-17 was down 7.5% as a result of back-to-school attendance, according to Brian Fuhrer, senior vice president, product strategy at Nielsen.

This story has been updated to include October data