How SmileDirectClub CMO Learns From Brands Like Peloton, Casper 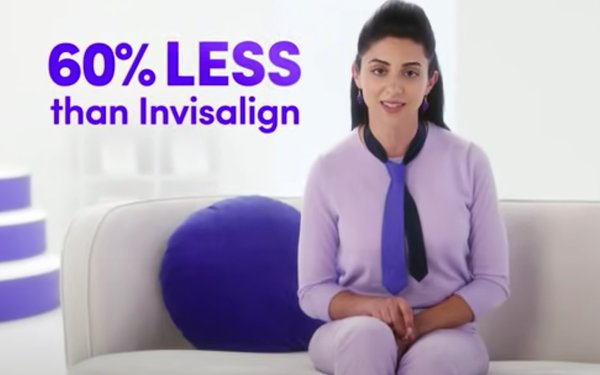 SmileDirectClub may compete in a crowded category. But it’s determined to see it as a two-horse race, hoping people choose its products over Invisalign. That means following customers wherever they go, and studying D2C brands with which they don’t compete. John Sheldon, chief marketing officer of the Nashville, Tennessee-based company, explains.

D2C FYI: This summer, you launched a campaign that bills you as costing 60% less than Invisalign, the brand that pioneered the category. Why take that approach?

Sheldon: We're changing how we talk about ourselves. We're moving from being the disruptor in the orthodontic space to more of a challenger brand. When we first came into the room, we met a lot of resistance. But we've proven the model.

So we're shifting our stance, comparing ourselves to the market leader. Our character, DeeDee, explains the price difference and the value of that lifetime smile guarantee.

D2C FYI: What about all the new entrants, companies like Quip, Candid and Byte?

Sheldon: They have minimal brand recognition. And of course, we watch what they do closely. But we have a 55% brand awareness, which is a big advantage. The goal of the campaign is to make sure people know SmileDirectClub offers a newer, and we think better, option than Invisalign.

D2C FYI: It has not been an easy time. The company just reported a disappointing 18% decline in sales and losses of $89 million.

Sheldon: Right now, our core customer is a household earning about $65,000. And they're facing some pretty strong headwinds right now, between significant inflation and the turmoil that's coming from this great resignation.

In households earning $125,000, where we're trying to move, they've done great. They can travel, pay off their credit cards, all of that. But for our core customer, it's not an easy time.

But we believe the long-term opportunity for clear aligners and teeth straightening, in general, is very strong.

D2C FYI: Tell us how the D2C model has evolved for you.

Sheldon: When we launched, we started with the whole thing being done virtually with our impression kit -- doctors connected with customers virtually. And teledentistry is very important. In 60% of U.S. counties, there's no orthodontist.

Then we found many people preferred talking to someone since it's such a big purchase. So we opened shops and now have 86 in the U.S. and 130 globally, in 14 countries.

We try and offer an Apple store-like experience.

Then we heard from customers who want to talk about it through their dentists, so last year we launched our partner network, working with almost 2,000 dentist offices.

So we act very D2C -- but just want to meet the customer where they are.

D2C FYI: What companies do you watch closely, hoping to learn more?

Sheldon: Peloton. It seems like we are always chasing some of its moves by about six months, and we've done some "best practice" calls with them. Those calls are an important part of how we get better as a marketing organization.

I also really appreciate what a disruptor Carvana has been, and we talk to those guys on a regular basis. And because we sell our kits direct, we keep a close eye on both Ancestry.com and 23andMe. Before the pandemic, kits were about 10% of our business, and now it's about 50/50 between our shops and kits.

Sheldon: More innovation, Last year, we launched an app, and 90% of our customers use it. We're continuing to expand that. And customers can't see this, but we're continuing to make massive improvements in our treatment planning software, which will allow us to create better outcomes.

We just launched in France, and we're looking at a couple of openings in Asia.

And we think the year ahead will be big for us, as people emerge from this COVID cocoon. We expect 2022 to be a record year for weddings and reunions.