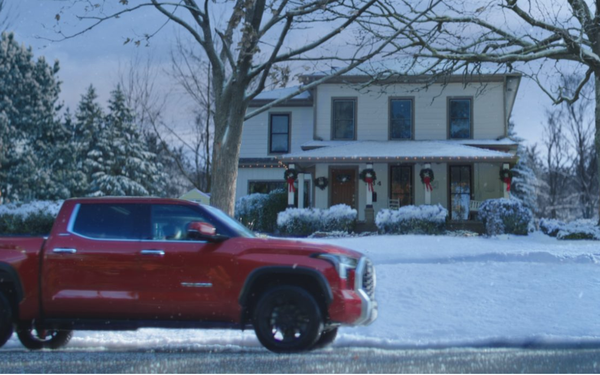 The brand is following the lead of its luxury sibling, Lexus, which rolled out its campaign featuring bow-bedecked vehicles last month. While individual dealer ads tout sales discounts, the national ads take a low-key approach focusing more on the season than sales.

The 60-second spot features a young girl who gets inspired to collect gently used books from her community to restock her favorite local bookstore after it’s devastated by a fire. In the final scene, the girl presents the shop owner with her favorite book, purchased from his bookstore when she was younger, as community members come together to repair his storefront.

Tying in with the spot, Toyota is spotlighting its longstanding partner, National Center for Families Learning, a national nonprofit that works to eradicate poverty through education solutions for families. Toyota is partnering with the group to provide more than 85,000 books for families nationwide through its 420 literacy centers across the country.

A second CGI-developed spot, produced in both English and Spanish, breaks later this month. Developed by Conill Advertising, “Nora’s Joy” features a young woman who finds the ability to share her joy.

Conill produced a similar holiday spot for Toyota last year called “The Journey” that was recognized by MediaPost as the best multicultural automotive marketing of 2020.

Toyota is inviting consumers to #sharethejoy by sending a digital “joy jar” to their loved ones via the @ToyotaLatino Instagram channel from Dec. 12 through Jan. 3. For every share, Toyota will make a donation to the Hispanic Scholarship Fund up to $50,000.

In addition to NBC’s “Christmas in Rockefeller Center” special, the 60-second version of “Bookstore” will continue with a number of high-profile airings, including NBC’s “Today," Thursday Night Football on Fox and “Sunday Night Football” on NBC.

Both the 60- and a 30-second version will begin airing on Dec. 10 across broadcast and cable networks. The integrated campaign will appear nationally on broadcast, digital and paid social.

The 60-second version of “Nora’s Joy” will launch Dec. 11 on Univision’s broadcast of their annual TeletonUSA 17-hour charity broadcast. Both it and a 30-second version will air on Hispanic broadcast, targeted cable networks and digital channels.