What Do Astrophysics And Ad Economy Forecasts Have In Common? 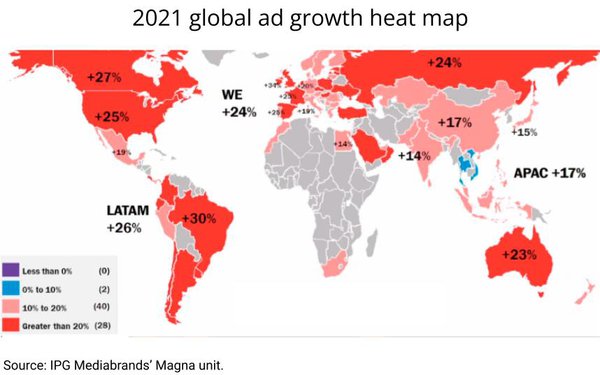 Well, Letang didn’t use that one, but he did describe the economic drivers that have led each of the Big 3 forecasting units -- Magna, GroupM and Zenith -- to dramatically upgrade their outlooks for 2021 to an unprecedented twentysomething percentage growth.

Specifically, Letang described it as a “planetary realignment,” and utilized the above “heat map” to illustrate how it impacted much of this planet. You know, Earth.

GroupM’s Brian Wieser -- a former colleague of Letang’s back when he worked at Interpublic -- said he concurred with Letang’s planetary realignment metaphor, but personally uses a different phrase to describe it: “secular growth drivers.”

What exactly are those drivers, er, realignments? To describe that, Letang invoked another astrophysical metaphor, describing them as “dark matter” that could be attributed to the acceleration of “digital marketing adoption, especially among small businesses.”

Extending his astronomical metaphor into 2020, Letang cautioned that “the planets will be drifting away again,” because underlying economic growth will be slower next year. And he produced another nifty heat map to illustrate the effect on planet Earth (below).

"Looking at 2022, the reddish map turns to pink as the economy and marketing demand pulls down," Letang noted. 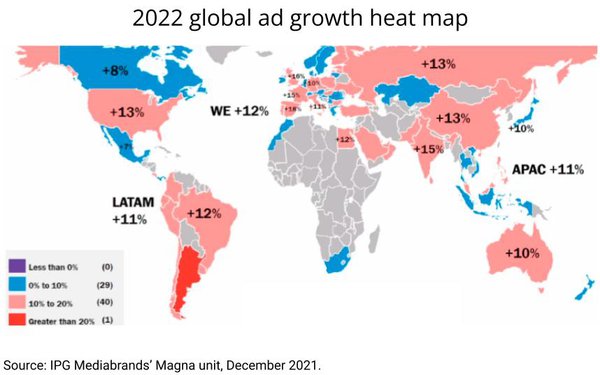