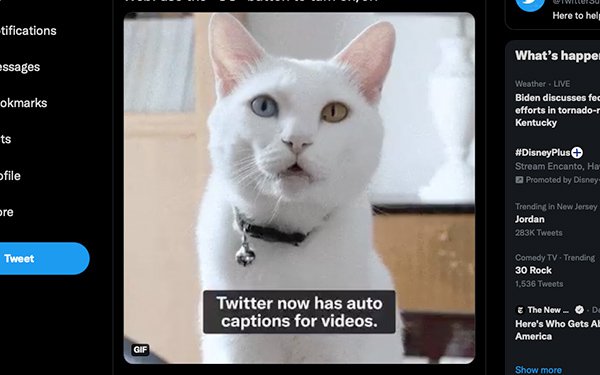 Yesterday, Twitter announced that all videos uploaded within tweets will have automatic captions enabled. Users will now be able to watch videos without sound –– an ever-growing trend across social media, TV, and even movies,over the past few years.

For mobile –– iOS and Android users -- Twitter said, captions will be automatically activated for in-stream videos that are muted, while desktop users will be offered the choice to activate them based on their viewing preferences.

The social media platform is providing automatic captions in 37 languages. The select language of whatever device one used to upload the video will determine which language is used for captioning.

No translation component has yet been announced, nor has a caption-editing tool.

Muted videos with the assistance of captioning have become vastly popular among viewers of all ages, across all viewing experiences. A study conducted in November found that 75% of all consumers watch video content on mute throughout the day.

While strategically captioning a video advertisement can determine whether or not consumers pay attention to a particular brand or product, the platform itself making such a change will likely invite users to engage with more content across various formats.

As a text-driven social platform, Twitter must compete with the exponential rise in short-video content championed by newer platforms like TikTok. Auto-captioning is a step toward creating a more visually stimulating digital experience.

According to TechCrunch, the inclusion of auto-captioned videos in this video-scrolling format is expected by users and therefore necessary for Twitter to include.