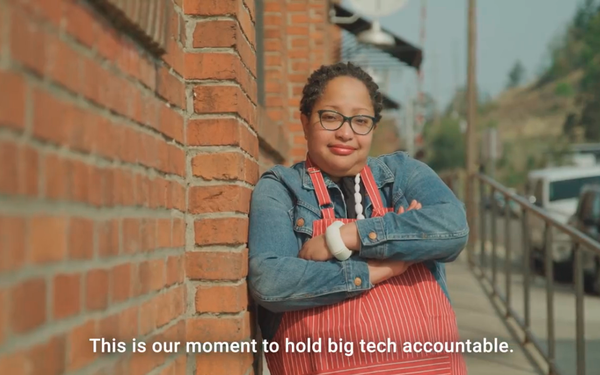 Facebook. Amazon. Google. Apple. These are the four tech giants that The Main Street Alliance (MSA) -- a national network of small business coalitions -- is targeting in their new ad campaign.

The new video ad urges Congress and the Federal Trade Commission to stop Big Tech from using small businesses (SMBs) as an excuse against reform.

The truth, says MSA, is that instead of aiding SMBs, Big Tech exploits them at every turn -- by providing misleading and unreliable data, imposing hidden costs, designing confusing interfaces, and making sudden changes to their rules and algorithms, as well as providing inadequate customer service.

According to a recent Times article, there are thousands of examples of SMBs being crushed by Big Tech, including a storytelling platform called Upworthy, which was stamped out by Facebook due to changes it made in targeting "click bait."

Toward the end of October, Amazon and Google both started warning SMBs relying on their platforms that antitrust laws and further regulation of Big Tech could disproportionately harm SMBs' success.

Amazon went as far as telling SMBs that regulation could jeopardize their ability to even host third-party sellers. However, soon after, a GOP aide informed Axios that this was not true.

To gain a more in-depth perspective on the campaign along with Big Tech’s hypocritical influence over SMBs, we asked Sarah Crozier, communications director at MSA, a series of questions.

MediaPost: While they are both being attacked in the ad, what do you think about Facebook citing its support of SMBs in order to thwart Apple and its privacy policies?

Sarah Crozier: Small businesses have long been used as the straw man between giant tech companies' proxy wars. The Apple versus Facebook fight is the perfect example.

Facebook in particular makes the assumption that they are fighting for small businesses against Apple, who has placed themselves on the side of consumer privacy.

This isn't an either/or and Facebook's fight has much more to do with the perception of their ad algorithms -- which many small businesses already feel abused by -- than any support for small business. Apple uses its own gatekeeping power in different ways. Both have not been accountable to Main Street businesses.

MediaPost: Do you agree that Apple's privacy policies were in fact harmful to SMBs' business and sales?

Crozier: The assumption here is that Facebook's ad data is the ultimate gold mine for small businesses. In reality, small businesses have continued to be nickel-and-dimed to reach their core audiences, and must go off of analytics with no way to verify.

MediaPost: What do you view the positive future of antitrust regulation and enforcement to be?

Crozier: There is a particularsuite of bills in the House currently that would offer a great foundation for more equitable antitrust enforcement. In particular, the issue of structural separation, highlighting a clear rule that a company may not own both a dominant platform and any business lines that sell products or services on that platform, is critical to bolstering truly competitive markets.

MediaPost: Why do you think this type of campaign will be effective in combating misinformation, something that has recently taken our world by storm?

Crozier: For too long, Main Street has felt the impact of the unabated growth and uneven playing field with large monopolies. The consolidation of corporate power not only limits competition, but also squeezes small businesses out of supply chains and other core economic access points.

As the pandemic hammered small businesses, many large corporations continued to consolidate market share, making the landscape even harder to recover from.

This will have repercussions not only in our local communities and Main Street's, but our democracy and economy as a whole.

For social media companies in particular, we see that more accountability is needed so that small businesses have recourse and better standards of service.

Using small businesses as a shield against these needed reforms, is a frustration that small business owners are not standing for any more.