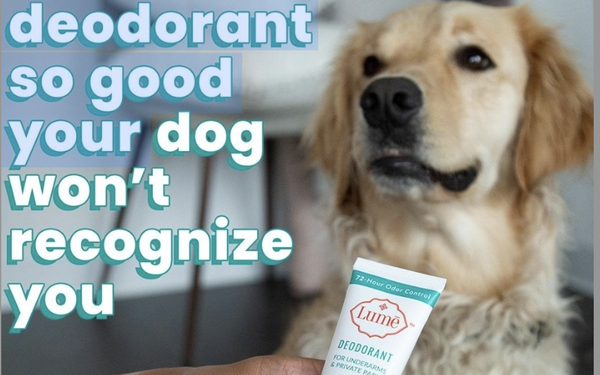 Harry's, already a leading brand for de-stinking armpits, is moving on to whole-body smells, acquiring Lume.

Developed by an ob/gyn to combat all kinds of body odor, Lume bills itself as the deodorant for "everyone's everything," including "bosom stank," "funky junk" and "down-there stench." Its widely viewed comical videos explain it works in any crevice that can hold a pencil.

It's also cheeky in its acknowledgment that "feminine odor" has done women a world of harm, both in body confidence and the overprescription of antibiotics. Founder videos explain that's what motivated Shannon Klingman, M.D., to start the brand, working with a KitchenAid blender from home.

The brand's upbeat medical explanations make it clear that the problem is not vaginas, armpits, butt cracks or feet, but flatulent bacteria, "which eats your sweat and farts out odor."

It claims to control odor six times longer than both Native, the P&G-owned natural brand, and Schmidt's. Like those natural brands, it is aluminum-free. And it also doesn't contain baking soda, which gives many people skin rashes.

"I am thrilled to partner with the team at Harry's at this point in our company's journey," Klingman says in the company's announcement. "They are proven experts in scaling omnichannel personal care brands, and they deeply understand and support our mission to disrupt the odor control market."

Harry's says it's the first acquisition for Harry's Labs, its internal innovation engine. So far, the company has launched such brands as Flamingo, its women's shaving division, Cat Person, which sells cat care products, and Headquarters, a haircare brand.

The deal also shows how Harry's continues to move on from its failed acquisition by Edgewell Personal Care, which owns Schick. That deal, proposed at $1.37 billion, got squashed by the Federal Trade Commission early in 2020, which said it would eliminate too much competition and be bad for consumers.

"The idea about M&A for Harry's is we want to be a multicategory CPG company and build a family of CPG brands," a Harry's executive told TechCrunch. "We want to create more and better things for consumers, and we are looking for brands aligned with that mission, positioned in a way we can be helpful and [be] brands serving unmet needs."

Harry's has raised another $155 million in funding, bringing its total fundraising since 2013 to $650 million, reports TechCrunch. Its current valuation is now $1.7 billion.