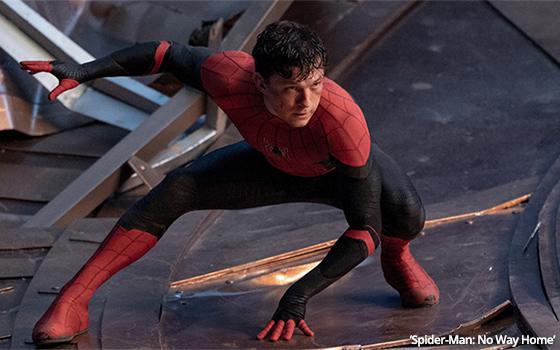 Sony Pictures’ “Spider-Man: No Way Home” took advantage of its big mid-December theatrical opening to get a running start on the bigger Christmas holiday weekend period -- adding another hefty $81.5 million in box-office revenues, according to Comscore.

In its debut weekend, the movie posted $253 million -- the third-largest North American theatrical opening ever.

In all, “Spider-Man” has totaled $467.3 million in North American theaters to date, with a total worldwide gross of $1.13 billion. It has become the first film in the pandemic era to surpass $1 billion worldwide.

The big holiday weekend drew a crowd. Six of the top 10-grossing movies debuted on the weekend.

While the weekend soared in overall North American theatrical revenues -- up 91.6% to $145.3 million, according to Comscore -- it is still 28% below the pre-pandemic 2019 Christmas weekend, according to IMDb’s Box Office Mojo.

In second place this year after “Spider-Man” for the holiday period was Universal Pictures’ animated “Sing 2,” with a healthy $23.8 million.

In third place was Warner Bros. “The Matrix Resurrection” at $12 million -- a bit of a disappointment, according to analysts, who point to the movie having a simultaneous opening on premium streamer HBO Max, which may have hurt its performance.

“Matrix” recorded 498 million impressions over the most recent two weeks for its national TV campaign.