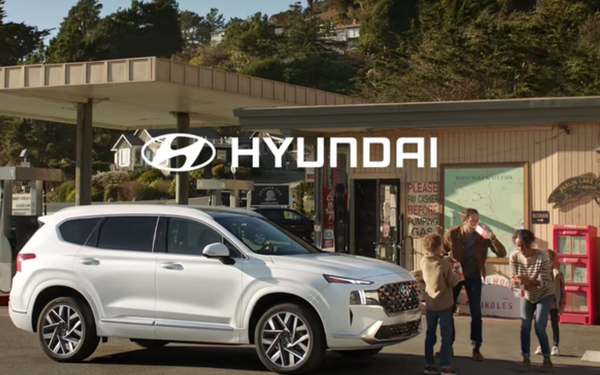 What a year it has been for the automotive sector.

Between supply chain issues that restricted the number of vehicles being shipped to dealers and a seemingly never-ending pandemic that rattled all areas of the economy, it might be surprising that the industry is finishing in as good shape as it is.

The upside to the limited supply is, dealers are no longer in a position to have to offer incentives to move inventory -- so profit margins are high.

The most-read auto story of 2021 was a great example of how automakers had to get to creative to, well, make creative. "Hyundai Partners With Amazon, Targets Families With Santa Fe Creative" details how the automaker used an actual family in the spot due to COVID-19 restrictions on the filming industry. The result was a naturalness you might not have found with actors.

“I think you can feel a little bit of the chemistry between them,”  Hyundai Motor America CMO Angela Zepeda told Marketing Daily.

“It's not the Hyundai that came here 35 years ago. It's bold, forward and it's eco-focused,” Zepeda said.

Studies and rankings are always popular, as indicated by the second most-read automotive story: "Ford F-Series, Honda Accord Most Popular Vehicles," which featured data from a study by Insurify.

Lexus grabbed the third most-read position with "Lexus Reveals Vehicle Created By Twitch Gamers." While consumers won’t be able to find the tricked-out IS model at dealerships, it’s still fun to imagine what cues the automaker might take in actual future designs.

Twitch was a hot medium this year. More than half a million Twitch viewers tuned in to the Jan. 13 livestream hosted by streamer Fuslie to watch and weigh in on the story.

Celebrities and sports cars are always a winning combination, so it’s no surprise the fourth most-read auto story was "Porsche Enlists Keanu Reeves For Longform Video." While 8 minutes might sound like an eternity, the video is actually fast-paced.

Reeves is joined by another actor, Alex Winter. Both actors are self-professed longtime Porsche enthusiasts. Reeves talks about how he once owned a black 911 Carrera, which he affectionately named “The Sled.”

General Motors pushed a lot of envelopes this year with its enthusiastic proclamations about moving toward an all-electric future. To cap off the efforts, the automaker unveiled some image tweaks, which was the subject of the fifth most-read story, "GM Unveils New Logo, Brand Identity."

"Publicis Groupe Creates 'Bespoke' Agency 'Q' For Infiniti" was the seventh most-read automotive story and detailed how the holding company was reorganizing its talent pool to better serve one of its top clients, the Nissan Motor Co. luxury brand. The agency is centered on digital experience.

The subject of the ninth most-read automotive story, "Rivian To Open Retail Store In Brooklyn," seems unremarkable. But when it comes to a hot brand like the electric vehicle maker darling, everything they do seems to garner interest. The automaker also developed a “guides” program featuring a team of owner/ambassadors available for future owners to question about the vehicle.

The upbeat overall theme of the automotive ads shows one clear thing: While the pandemic might be presenting challenges, the industry intends to make the best of it and push on through.