Best/Worst 'Informers' Of The Year 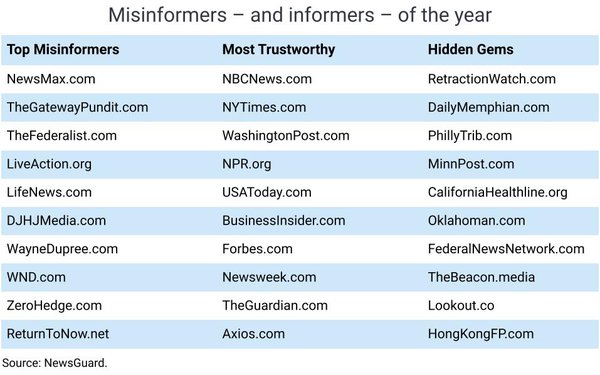 Media veracity watchdog and ratings service NewsGuard this morning published its annual list of the best and worst publishers of 2021, based on how they were assessed for publishing truthful and accurate information, or not.

NewsGuard tracks thousands of sites for veracity throughout the year, and its ratings are used by major advertisers and agencies to help develop inclusion and exclusion lists in order to direct their ad budgets toward good actors and to keep it away from ones that are spreading misinformation, lies and false facts, often just for profit.

The rankings shown above, as well as linkable descriptions to recommended sites in those and other categories below, are based on NewsGuard's assessment, with the exception of the "Top Ten Most Influential Misinformers," which is based on a combination of their misinformation ratings, as well as engagement.

"Of course, some unreliable sites have more of an impact than others because they reach a much wider audience," NewsGuard General Manager Matt Skibinski explains in his description of this year's awards.

"In this list, we have identified the least credible sites — meaning those that fail NewsGuard’s criteria for repeatedly sharing false content — that garnered the most social media engagement in 2021, according to internet metrics firm NewsWhip, starting with the site with the most engagement. These websites have a record of routinely publishing falsehoods and, in most cases, declining to disclose to readers who owns the site and creates its content."

Among the nearly 1,000 sites read by audiences in the United States that earned a perfect 100 score from NewsGuard this year, these 10 received the most social media engagement, with the most widely shared at number one. This list includes a wide range of sites, including a national newspaper, a weekly magazine, and three local sites.

About 15% of new sites serving users in the United States rated by NewsGuard receive a perfect score of 100 out of 100 points.

The sites on this list all achieved that designation, producing content that is truthful, compelling, credible, and transparent. However, due to their relatively small staffs or the niche topics they cover, they typically receive little social media engagement.

Below NewsGuard highlights 10 sites engaging in quality journalism that you may have never heard of. (Unlike the other lists, this is not sorted in order of engagement, as all the sites were selected because they receive relatively little engagement.)

This past year, local news sources were especially important, as news readers sought out information about local COVID-19 testing and vaccination options, school and business closures, mask requirements, and more. In certain states, local media sources gained a national spotlight after a close presidential election in which vote-counting, audits, and disputes about election integrity lasted for months.

The sites on this list are all focused on local news in the U.S., rated as highly credible by NewsGuard, and among the most highly shared sites in their category.

Even high-quality news sources can miss stories and perspectives that are highly important to specific groups and communities.

The sites on this list all are rated as generally trustworthy by NewsGuard — and all cover communities often overlooked and underrepresented in mainstream media.