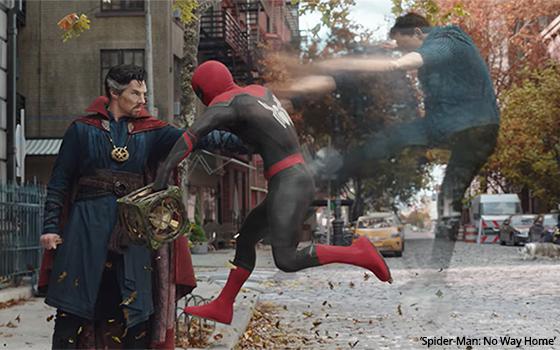 As "Spider-Man: No Way Home" continues to hit higher U.S. theatrical revenue marks, 2021 scored a healthy improvement for the U.S. movie industry versus a year ago -- now at $4.5 billion, more than double the revenue for 2020, the first year of the pandemic.

Sony Pictures’ “Spider-Man: No Way Home” started off 2022 strong, adding another big haul of $52 million in its third week of release for the New Year’s weekend, according to Comscore.

Comscore says the first weekend of 2022 totaled $96 million for all U.S. theatrical releases versus $4.5 million during the same period in 2021.

The latest version of “Spider-Man” has now become the 10th-best U.S. movie release of all time -- with $609.9 million, according to Comscore.

On a global basis, the Sony Pictures movie is now at $1.4 billion in revenue, according to Box Office Mojo.