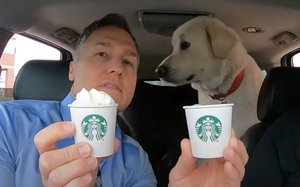 Image above from "Puppiccino" story: Still from a video by comedian and lawyer Wes Austin.

In #1 position was a story based on a survey by IRI that showed recommendations from family/friends and TikTok videos were among the top drivers of product purchases among Gen Z females. Among the 998 respondents, 59% cited family/friends as product purchase influencers, followed by TikTok videos (39%), in-store displays (38%) and television ads (31%).

In second place was the Top 10 story roundup from 2020, with that year's number-one story an analysis of an advertising campaign for Halo Top ice cream titled “Stop Shoulding Yourself” -- in line with this year’s trend for sweet snacks as well. The 2020 campaign featured Colombian plus-size model Maria Jimenez Pacifico dancing around her apartment while rejecting “shoulding” suggestions—as in “I should lose weight, I should work out more, I should eat more salads.”

Another QSR campaign landed in the #4 spot. It marked the return of the angry Noid character first served up by Domino’s Pizza in 1986. In the most recent go-around, the Noid tried (and failed) to sabotage a four-wheel R2 robot from self-driving delivery company Nuro from delivering the chain’s pizza pies.

In fifth place was a story chronicling the efforts by Kraft Heinz, Hershey and Turkey Hill Dairy to satiate the pandemic-induced desire for cold, indulgent treats. Kraft Heinz partnered with Hershey on a line of refrigerated desserts called Colliders, derived from well-known candies. Turkey Hill debuted three new product lines with a total of 16 flavors in the form of ice cream sandwich cookies, fruit and cream bars and layered sundae cups.

Despite a plethora of announcements last year about all things plant-based, only one such story made the Top 10 list: Danone’s campaign to “demystify” plant-based products four years after acquiring the Silk brand. The year-long campaign began by explaining the derivation of almond milk under the “Milk Of The Land” banner.

One prominent trend of 2021 was the continued stream of brands embracing the gaming community. Ranking #7 in readership was Dunkin’s becoming the “official fan fuel” of Twitch Rivals North America and the online gaming series’ only QSR partner. One of the goals of the initiative was to reach people who are brand-flexible and don’t watch traditional TV.

Another pandemic-specific story addressed the efforts of the Blue Bunny ice cream brand to financially assist ice cream shops in the walkup to National Ice Cream Day in July. Dubbed “The Heart Of Fun,” the Blue Bunny campaign partnered with interior designer and TV personality Nate Berkus. As explained in story #8, it included a contest in which one ice cream parlor would receive approximately $50,000 worth of prizes.

Starbucks has long catered to dog owners by giving them whipped cream for their beloved critters, so it was little surprise that the coffee Goliath had trademarked the term “Puppuccino.” As reported in story #9, its filing with the U.S. Patent and Trademark Office indicated that “Puppuccino” would apply to milk-based beverages, whipped cream and bandanas.

One of the edgier CPG campaigns of 2021 was that of Snickers depicting “surprise problems and pitfalls” of everyday life to introduce the Snickers Peanut Brownie. Landing in the #10 slot, the story included a boyfriend who agreed to keep the relationship with his girlfriend “loose and open” and then discovered that “open” includes an older gentlemen also vying for his girlfriend’s attention.

Since the Top 10 stories of 2021 included the Top 10 roundup from 2020, we’re tossing in one more. Ranked #11, it detailed the results of a survey by data and tech services provider Inmar Intelligence of 300 CPG marketing/sales respondents—two thirds of whom indicated they planned to run a media campaign with a retail media network last year. One common observation from the survey was that brand marketers wanted retailers to share more of their shopper data.