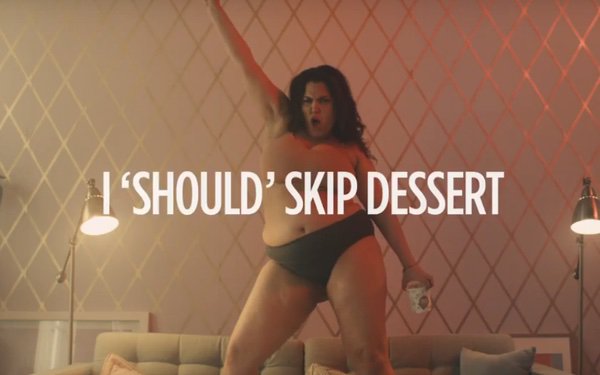 Clip from the Halo Top ad chronicled in No. #1 most-read story.

Most of the 10 best-read stories across the CPG/food, non-alcoholic beverages and QSR beats in 2020 had the shared element of fun—and sometimes, unfortunately, the overarching influence of COVID-19.

Story #1—about a lively campaign for Halo Top ice cream called “Stop Shoulding Yourself”—got twice the readership of story #2, which was about PepsiCo’s Bubly brand. No. #1 featured Maria Jimenez Pacifico, who endured body shaming while growing up in Colombia on her way to becoming that nation’s first plus-size model. The skimpily clad model shimmied about in a video while rejecting “shoulding” suggestions, as in “I should lose weight, I should work out more, I should eat more salads.”

Story #2 was another fun one, about Michael Bublé’s latest escapades for Bubly beverages. In a campaign commercial, strangers and police officers had gathered outdoors at night in an urban setting—sans masks—while watching Bublé cavort high above, on a billboard. Once again, the likeable Canadian-Italian singer was tying to convince the world to pronounce Bubly like Bublé, going so far as to spray-paint his é name change on the display.

Story #3 falls in the serious—as opposed to fun—category. Published in February, it chronicled the “very difficult” fiscal year 2019 that Kraft Heinz had just endured. The story explained how Kraft Heinz was planning to raise its media spending by 30%, while rationalizing SKU overflow and halving the number of agencies with which it was working. This was months before the pandemic turned grocery store aisles upside down.

Returning to fun, the fourth most-read story of 2020 was about a campaign for Organic Valley’s whole milk and grass milk that sought to educate people about the farmer-owned dairy co-op’s standards of animal care. Central to the campaign was the idea that cows not kept in confinement but allowed to graze outdoors are happier and healthier—and thus produce better milk. The campaign was titled “From Outside With Love.”

Story #5 also involved cows—albeit in a more bizarre fashion. It previewed a campaign from the fast-casual BurgerFi restaurant chain, which eschews steroids, hormones, antibiotics, chemicals and preservatives in its food. A “dirty secret” was revealed: Cows use growth hormones to “enhance their performance.” To reinforce the point, an (overly) muscular pro baseball player frantically breaks a bat over his knee.

In a pandemic-influenced story, Kraft Heinz brand Oscar Mayer took the #6 best-read spot for a story about its campaign encouraging “front-yard cookouts” while pledging to donate one million meals to Feeding America. The story also noted that the Heinz ketchup brand had committed $1 million in $2,000 grants to help 500 independently owned diners cover their rent and operating costs amid pandemic-induced shutdowns.

Country Time (yes, Kraft Heinz again) provided a useful case study in genuine cause-related marketing with the 7th best-performing story. A video for the Littlest Bailout Relief Fund boldly called out big corporate entities that had received government stimulus funds even as social-distancing rules barred kids from their neighborhood lemonade stands. Country Time launched a sweepstakes for youths in which 1,000 winners would each receive a $100 Visa prepaid debit card.

One giant CPG company that clearly had its act together heading into 2020 was Mondelez International (Oreo, belVita, Ritz, Triscuit and Wheat Thins, among other iconic brands). The headline of story #8: “Mondelez Plans Imminent Media ‘Attack,’ Feasts on At-Home Snacking Revenue.” Like its competitors, the company had gained new users during pantry-loading times. But it was among the very few at the time planning on increasing its advertising/marketing spending to retain users going forward.

Pepsi landed in the #9 spot in a story about a playful global campaign for its partnership with the Union of European Football Associations. In the frenetic “Play Never Stops” video, celebrated athletes Paul Pogba, Raheem Sterling, Leo Messi and Mohamed Salah sparred with each other to score a final can of Pepsi. The venue was a music event where soccer balls ricocheted around the screen in a mashup of real and imagined physical stunts.

Only one story about QSRs made it into 2020’s Top 10: NASCAR race car champion Dale Earnhardt Jr. becoming the first celebrity voice of the 43-year-old Bojangles chicken and biscuits restaurant chain. This was another useful case study—this one regarding partnerships—because it started with a chance encounter between Earnhardt and Bojangles CEO Jose Armario at a race in South Carolina. Turns out the two “Southern brands” had a lot in common.