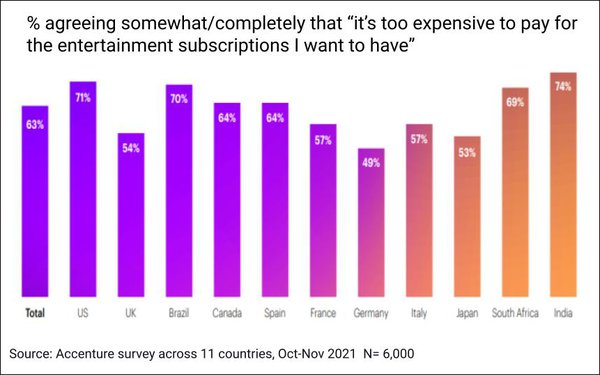 As the number of streaming service options has multiplied, so have consumers’ frustrations — and calls for new content aggregation solutions.

We have already begun to see the start of more cooperation on this front among content providers. One recent, if relatively small-scale, example is Curiosity Stream’s launch of a “smart bundle” that includes access to five third-party subscription video-on-demand (SVOD) services with content that complements its own “factual” science, nature, history, technology and lifestyle offerings.

Accenture is out with the latest survey to document the user problems that seem to point to the inevitability of more aggregation. This one surveyed 6,000 consumers age 18 and up in 11 countries (including 1,000 in the U.S.) online, during October and November 2021.

Some of the key findings:

* Globally, 60%, on average (65% in the U.S.), said they consider the process of navigating among different streaming services “a little” to “very” frustrating, and 44% report spending more than six minutes trying to find content they want to watch. “Navigating through OTT services is like entering different rabbit holes, each with its own entry and exit,” sums up the report. 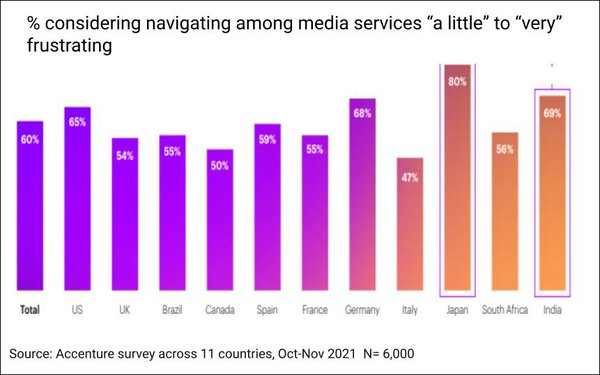 * Nearly a quarter (22%) report using four or more services, versus 33% subscribing to just one. Multiple-service users are somewhat more likely to say they’re frustrated with the navigation experience (65%, versus 60% of single-service users).

* 58% think that using a cross-service search engine like Roku or Apple TV is more convenient than going directly to a service and choosing something to watch, and 67% said such tools are a good way to find desired content.

* 33% (40% in the U.S.) say they plan to “somewhat” or “greatly” decrease spending on media and entertainment, including streaming services, across subscriptions and one-time purchases in the next 12 months. 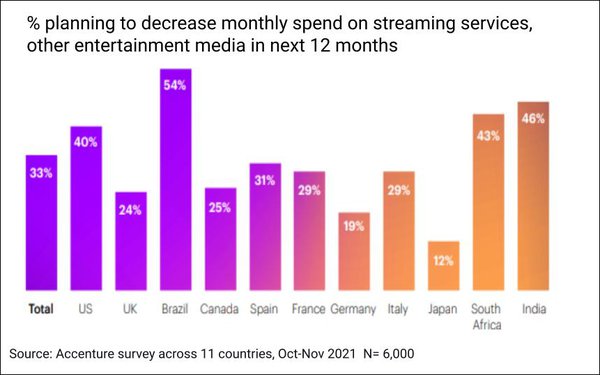 * Just 34% expressed interest in adding new services. One big reason: Most consumers feel they’re paying for a lot of content they never watch and they’re not interested in. For example, when consumers globally were asked what percentage of content provided by five major streaming services is relevant to them, no service topped 40%.

“That’s not far off from what we found consumers thought about the content they paid for from their cable providers a few years ago,” write the report’s authors — an observation that should send chills up the spines of the media players collectively pouring hundreds of millions into streaming content to drive advertising and subscription dollars.

*Loyalty to specific services is heavily dependent on current content. Most consumers (in some cases up to 80%) said they care more about the content delivered by a particular service than the service itself — a tenuous foundation for the services.

*With more than 200 streaming options in the U.S. alone, each with its own shows, and most with just one bundle, 63% globally — and 71% in the U.S. — agreed somewhat or completely that it’s too expensive to pay for the entertainment subscriptions they want (chart at top of page).

*Recommendations are incomplete and often off base, because algorithms are used to generate them, in the absence of any central, cross-platform viewing history.

More than half (56% globally, 57% U.S.) said they would like to be able to take their profiles from one service to another to better personalize content, and 51% globally (62% U.S.) said and they’d be “happy” to allow a VOD service know more about them to make recommendations more relevant.

*Consumers identified several ways services could provide better recommendations, including allowing them to choose the genre they’re interested in (73%); basing recommendations on the popularity of content (57%) or their mood (54%); and using what family or friends are watching to suggest content (47%).

As a global provider of digital and cloud services, including IP and customer experiences services for media companies, Accenture no doubt stands to benefit from a push to aggregation.

But that doesn’t negate the validity of the report’s insights.

“There’s no doubt aggregation is coming. Consumers clearly want it and the industry as a whole needs it,” it concludes. “Becoming a successful aggregator or surviving as an individual streaming service requires different sets of actions. But what’s clear for all players: A blind focus on driving subscriber counts without taking steps to position the business for the aggregated future, regardless of which route you choose, presents near-certain peril.”

As the report notes, any of the current streaming players — major SVOD services, access devices and connected TVs, major internet onramps and consumer apps, and even traditional cable operators — could become aggregators. Top SVODs might “google up” other apps or make partner apps available inside their service. Other options could emerge from access devices that already do basic aggregation of apps — on connected TVs or devices, for example.

As for how many aggregators are likely to exist, the magnitude of achieving cross-platform discovery is likely to “rapidly push the world toward a small number of aggregators that can achieve outsized financials through economies of scope and scale leverage. The numbers will only work for business models that can extract attractive rents from partner apps, subscriber fees, and premium CPMs while amortizing largely fixed operating costs across a bigger and bigger base.”

Meanwhile, we'll see "mini-bundles," including ones that offer attractive audiences for ad targeting or audiences that are willing to pay higher subscriber fees for premium content or services or for exclusive brands. "Other mini-bundles might go for scale across with an everyman play — the Android phone versus the higher-priced Apple iPhone. Both types of mini-bundles will compete against the relentless logic of platform economics. For the individual services, aggregators extract rents but also offer a range of benefits. One of the biggest is simply ensuring survival.”

“Initial incarnations will be bundles of SVOD and AVOD (ad-supported VOD) streaming services. But look out for the categories of offerings to expand to including music services, digital books and podcast apps, video games, virtual fitness, food delivery, commerce, and even productivity tools," Accenture forecasts.

"As aggregators battle to own consumers' 'time spent,' we can expect future evolutions to aspire to be the onramps for any form of digital consumer experience. In fact, as time spent comes to include the limitless possibilities of the metaverse, aggregators, if trusted, can be enablers and caretakers of digital identity, entitlements, security, currency, and more. Indeed, the battle to be the home of a consumer’s streaming experience may, in fact, be just the first skirmish in the broader battle to be the home of a consumer’s every experience.”