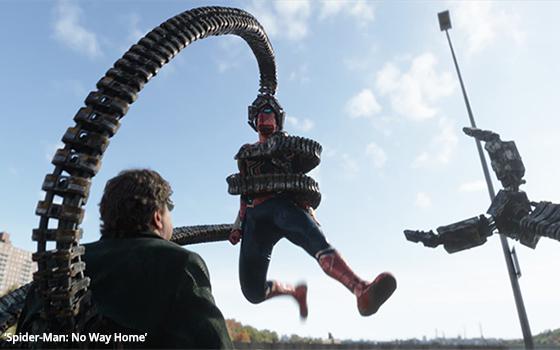 Young moviegoers are helping “Spider-Man” post another dominating $33 million at the theaters' box office, according to Comscore.

At the same time, new older adult-skewing movies such as the female spy movie “The 355” delivered disappointing results, grabbing just $4.8 million this past weekend in its debut.

A rough analysis suggests “Spider-Man” is benefiting from young versus older moviegoer habits, Paul Dergarabedian, senior media analyst at Comscore, told Media Daily News. “Unless we could conduct a new poll, we may not know for sure, but based on what’s working and what’s not, I think that’s a safe conclusion.”

In addition to “The 355,” other adult-targeted movies continue to post weaker performances after three weeks of release.

Over the past two weeks, movie studios have spent a collective $25.9 million in estimated national TV advertising for 8,142 airings -- garnering 2.9 billion impressions, according to iSpot.tv. A year ago, the total was $7.2 million over the same period.

Universal spent more on “The 355” in the last two weeks than any other movie over the period: $6.9 million. So far, the national TV campaign total is at $13.6 million.