'Playtime Is Over': Aliens Signal Trouble In New Samsung Ad 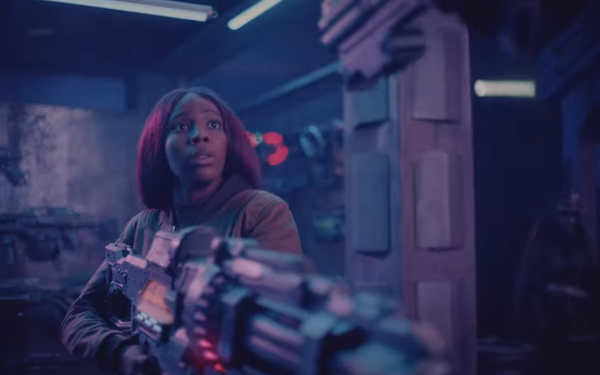 Samsung has broken a campaign for its new Exynos 2200 “next generation” mobile processor, which it will likely put in its Galaxy S phone series this year.

The 60-second ad, via BBH, London, features a woman at an exotic fair reminiscent of various "Star Wars" films. Vendors keep beckoning her with pixelated goods, like a watermelon that’s split open and a sword that looks like it’s from a video game.

Then a strange, large rabbit guides her into an underworld that looks like a bar at night. She enters a stand and picks up a gun that triggers a standoff between her and various aliens. The camera then zooms toward the rabbit, who covers his eyes. A caption reads, “Playtime is over.”

The CGI-laden ad is meant to signal a new era of gaming enabled by the new processors. Such graphics were previously only accessible via a game console, Samsung asserts.

The agency’s brief was to drive anticipation among keen gamers ahead of the launch of the first phones containing the new mobile processor, which features a state-of-the art mobile graphics processing unit (GPU) developed by Samsung in partnership with AMD.

The ad was shot in Kiev and directed by Matthijs Van Heijiningen (director of Netflix’s “The Forgotten Battle”).

In a statement, Changwan Kim, brand manager at Samsung Electronics, said: “We wanted to implicitly express how the Exynos 2200 processor will bring differentiated gaming experience on mobile, in a short, condensed fashion. We...believe this project may be a big milestone that changes the course of how we promote semiconductor products in the future.”