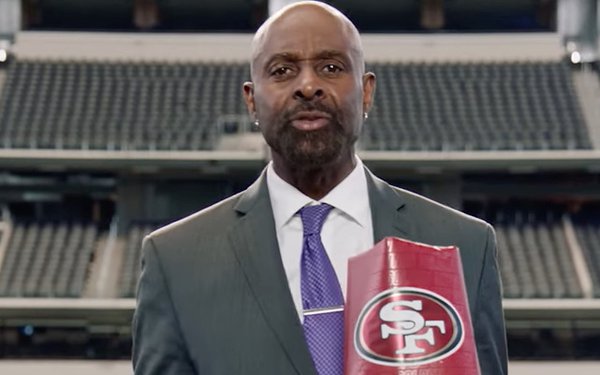 Image above: Jerry Rice, who once played for the San Francisco 49ers, with the appropriate limited-edition bag of Lay's.

In the walkup to its first Super Bowl appearance in 17 years, Lay’s has launched a campaign that combines potato farming with limited-edition packaging emblazoned with 29 NFL team logos.

The snack brand evokes a home-field advantage of sorts by using soil taken from NFL stadiums and fields to grow potatoes at a farm in Texas that produced the chips housed in the special packages.

It’s all explained in this spot by former NFL wide receiver Jerry Rice, who thanks fans “who stayed golden through the good times and the bad times.”

Golden is a reference to the campaign theme “Golden Grounds” and the use of stadium-sourced soil to grow potatoes at a Texas farm and “create chips infused with the grounds and the glory of each NFL team.”

The limited-edition packages of Lay’s potato chips are available via a Twitter sweepstakes that runs through Jan. 26.

Contestants choose the NFL team of their choice—excluding the Cincinnati Bengals, Denver Broncos and Cleveland Browns—and tweet special hashtags to win a bag with an approximate retail value of $10.

In announcing the promotion, Lay’s did not explain why the three B-teams were left out. Marketing Daily reached out to the brand for clarity, but a PR rep declined to comment.

Lay’s hasn’t revealed the commercial that will appear during the Super Bowl.

Nicknamed “The Bus” for his size and running style, former running back Bettis organizes an actual bus to take the football legends back to The Big Game.

Antics include half of a house hitched to the bus, an impromptu sing-along to Olivia Rodrigo's #1 hit “Good 4 u” and Bradshaw joining the road trip duct-taped to a special seat.